A committee constituted by the L-G found that the annual maintenance contract tender for the DTC buses was “flawed”, as it allowed the participation of only two players that won the contract to supply the buses as well. 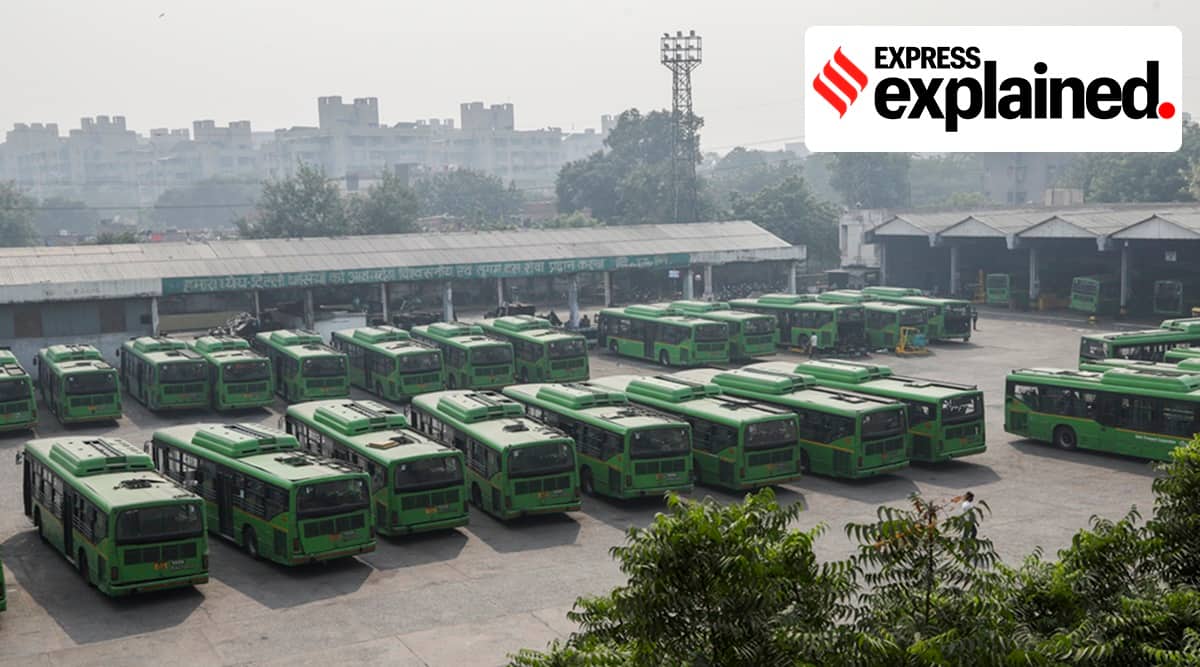 The Delhi Transport Corporation (DTC) has landed in controversy over the recommendation of a committee constituted by Lt Governor Anil Baijal to cancel a mega contract pertaining to the maintenance of 1,000 low-floor AC buses over a number of “procedural lapses”.

The Rs 3,412 crore annual maintenance contract (AMC) would have lasted 12 years, but the committee has suggested that a fresh tender be floated with several changes. The AAP-led government has not yet scrapped the contract, which was cleared by the corporation’s board in November 2020.

On Monday (July 12), the BJP wrote to the L-G, demanding a CBI investigation into the matter.

Last year, the DTC floated two separate tenders for the purchase and AMC of 1,000 low-floor AC buses. Under the purchase contract, the buses would be covered by a three-year warranty; however, the AMC was supposed to kick in from day one, immediately after the buses were commissioned.

This decision was questioned by certain members of the DTC’s board in a meeting on November 27. Later, Delhi BJP leader Vijender Gupta started questioning the deal.

On the question of separate tenders for the purchase and AMC, DTC said that a composite tender covering both purchase and AMC for the vehicles had failed to yield results in the past. Very few players participated in the bidding process; as a result, new buses had continued to elude the corporation which last augmented its fleet back in 2008.

On the question of the AMC coming into effect from day one when the usual manufacturer’s warranty for the buses would also be available, the DTC has maintained that the warranty does not cover some costs, such as those of consumables like spark plugs, HT cables, filters, fan belts, lubricants, coolants, batteries, tyres, brake pads, brake drums, brake liners, etc., all of which are required for regular maintenance of buses once they start running.

The warranty, as defined in the purchase tender, says that for the first three years, the companies delivering the buses “will be responsible for any defect or failure of buses or equipment provided in these buses due to defective design, material or workmanship, for a period of three years or operation of buses up to 2,10,0000-km.

“The rectification/ replacement of failed components/ equipment will have to be undertaken by the Contractor free of charge at purchaser’s (DTC) workshop/ depot.”

The L-G formed the three-member committee on June 16, based on a reference from the anti-corruption branch.

The panel was mandated to “examine irregularities, if any, vitiate the tendering process and if yes, whether there is any criminal misconduct attributable to public officials”.

It was also asked to analyse whether the due process under the General Financial Rules (GFR) and the Procurement Manual 2017, which govern all such contracts, were followed.

Four days before the committee was formed, the purchase and the AMC contracts were put on hold by Transport Minister Kailash Gahlot.

The committee found that the AMC tender was “flawed”, as it allowed the participation of only two players that won the contract to supply the buses as well. This meant that the DTC may have ended up signing a deal that was “inflated”, and which eventually would cost the public exchequer.

In its 11-page report, the committee said that the AMC encourages “cartelisation” and “monopoly pricing”.

While acknowledging that floating separate tenders cannot be faulted in itself, the committee pointed out that the eligibility criteria “defeated the purpose of splitting the bids”.

It questioned the absence of a price reasonableness test against a well-defined benchmark, and dismissed the DTC’s contention that it could not do due to lack of expertise.

“DTC is well aware of cluster operations in Delhi, with some buses of similar specifications, have been added recently… A facile assertion that no estimation was possible is untenable,” it said.

The committee said it was “surprising” that the DTC had engaged the Delhi Integrated Multi Modal Transit System Limited (DIMTS), which operates the orange cluster buses, for bid management in case of the purchase contract, but had done an “in-house exercise for a much more complex bid” (AMC).

Also, “The Request for Proposal for AMC did not mention any method of evaluation for arriving at the lowest bid value… The evaluation criteria adopted by the DTC seems to have been flawed on an old practice of taking total cost of maintenance for 12 years.

“However, amendments in GFR in 2017 and manual of procurement 2017 require a discounted cash flow based evaluation for long duration contracts,” it said.

The government has claimed that the committee has given it a “clean chit”. The claim flows from the fact that the committee, while extensively scrutinising the AMC contract, has taken a seemingly contradictory stand on the purchase aspect.

The committee’s report says at the outset that it has “examined the material on record and observed that the allegations in the complaint essentially pertain to the AMC of buses. The committee therefore focused its attention only on the procurement process of AMC of the buses”.

However, it has said later that “The tendering process of purchase of buses warrants no interference and suffers from no major infirmity.”

The government has held up this line as vindication of its honest approach to the transaction.

The government is yet to announce its stand on the recommendation to scrap the AMC deal.

However, the committee has suggested that after cancelling the contract, DTC can explore the option of inviting fresh bids to “ensure wider participation”. DTC has also been requested to develop and strengthen in-house capabilities to maintain buses.

“A fresh bid be floated for a turnkey operation and maintenance contract (O&M) for these buses as against a simple AMC contract,” the committee said.

A turnkey contract, in the case of DTC, would mean that private players should be roped in to provide bus drivers, run the buses, and take care of day-to-day maintenance and repair of the vehicles.

Ideally the private player should also be entrusted with purchasing the buses, but in this case “subtle” changes are required as the DTC has already awarded the contract to JBM auto and Tata motors on a 70:30 ratio, it said.

There are around 6,600 public buses in Delhi at present, including about 3,670 under the DTC. The Supreme Court has observed in the past that the city requires at least 11,000 buses to cater to its needs.