Pakistan has issued special permits to Dubai Ruler Sheikh Mohammed bin Rashid Al-Maktoum, the crown prince and five other members of their family to hunt houbara bustard during the 2020-21 hunting season. 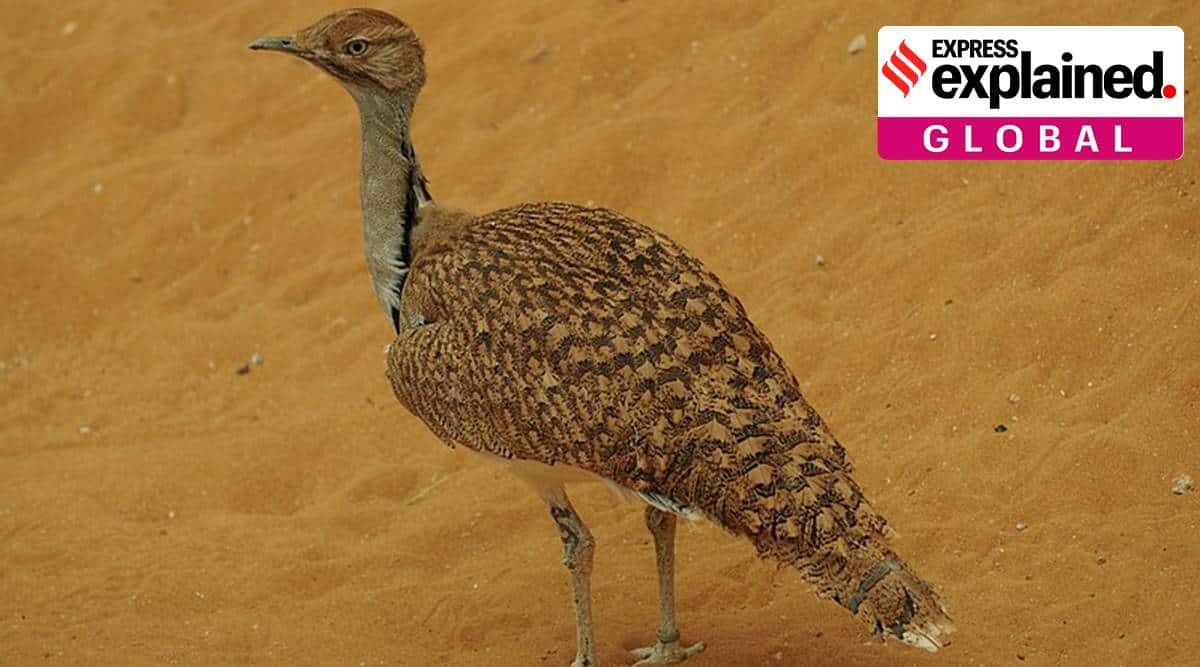 Earlier this week, the country also issued special permits to Dubai Ruler Sheikh Mohammed bin Rashid Al-Maktoum, the crown prince and five other members of their family to hunt the bird during the 2020-21 hunting season, Pakistan daily The Dawn reported.

But this is not the first time royals from the Gulf and their wealthy friends have descended on the deserts of Pakistan to hunt the rare bird species. These secretive and controversial private hunting expeditions date back over four decades and have continued even after Pakistan’s Supreme Court imposed a blanket ban on the killing of the houbara bustard in 2015. The order was later reversed.

What is the houbara bustard?

The houbara bustard — a large terrestrial bird found in parts of Asia, the Middle East and Africa — is known to migrate in thousands to the Indian subcontinent every winter. In fact, it is similar to the critically endangered Great Indian Bustard, which is native to India.

After breeding during the spring season, the Asian bustards migrate south to spend the winter in Pakistan, the Arabian Peninsula and nearby Southwest Asia. Some Asian houbara bustards live and breed in the southern part of their ranges including parts of Iran, Pakistan and Turkmenistan.

According to the International Fund for Houbara Conservation (IFHC), roughly 33,000 Asian houbara bustards and over 22,000 of the North African houbara bustards remain today. The main reasons for the decline in the species’ population are poaching, unregulated hunting and the degradation of its natural habitat, the IFHC website states.

Why is the houbara bustard hunted in Pakistan?

Vast swathes of land in Pakistan are allocated in blocks to wealthy dignitaries from the UAE, Saudi Arabia and other Gulf countries, who arrive in the country to hunt down the birds using hunting gear and falcons every winter. They kill the birds for sport and also because its meat is supposed to have aphrodisiac qualities.

Media coverage is not permitted at these cloak and dagger hunting expeditions, but the scale of each hunt is believed to be considerable. Each party has a convoy of over a dozen SUVs accompanying it and very often the dignitaries come with their own cooks and staff, locals told the BBC.

Why does Pakistan allow Arab royalty to hunt the houbara bustard?

For over four decades, the Pakistan foreign ministry has been extending yearly invitations to wealthy and powerful Arabs for hunting houbara bustards in the deserts of Balochistan and Punjab, in an attempt to strengthen the country’s diplomatic relations with Gulf nations. Arab hunters first started coming to Pakistan to hunt in the 1960s after the houbara population in the Arabian peninsula began to dwindle.

Similar hunting expeditions also took place across the border in Rajasthan, where Arab royalty ruthlessly hunted the Great Indian bustard until the practice was banned in 1972 following widespread backlash.

In Pakistan, too, the Supreme Court imposed a ban on hunting the houbara bustard in 2015. However, the ban was lifted the next year and the government continued to issue special permits to Arab royalty to hunt the birds during the winter. Challenging the ban, the government had argued that wealthy Arabs brought prosperity to under-developed areas surrounding the hunting fields and the ban would have a negative impact on Pakistan’s relations with Middle Eastern nations.

Each permit allows the individual to hunt a total of 100 bustards in a designated area during a 10-day safari. But the Arab VIPs are known to violate the terms of the permit and kill far more bustards than agreed upon. In 2014, a Saudi Arabian prince and his entourage allegedly shot down 2,100 houbara bustards during a three-week hunting safari, sparking nationwide outrage.

The incident in 2014 sparked a nationwide outcry amongst conservationists against the hunting of the vulnerable birds in Pakistan. It was this backlash that culminated in the Supreme Court’s ban on hunting the bird, which was later revoked.

Notably, Pakistan Prime Minister Imran Khan, who himself had once opposed hunting the bird while he was an opposition leader, personally approved the special passes to Dubai ruler Sheikh Mohammed bin Rashid Al-Maktoum and his family members.

Earlier this week, after Pakistan allowed UAE royals to hunt the bird, 10-year-old Ahmed Hassan filed a plea in the Islamabad High Court seeking a ban on hunting falcons and other endangered birds in the country, ANI reported.