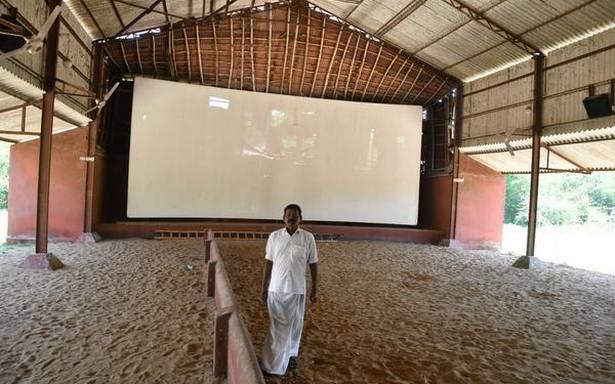 The tent talkie, possibly one of the last surviving in Tamil Nadu, faces an uncertain future post the lockdown

Paying 15 paise for the tharai ticket (sitting on the ground) at the Ganesh Thirai Arangam (theatre), a tent kottai and watching Thiruvilayadal while munching on murukku: these are some fond memories G. Mahesh, a 50-year-old electrician from Kannigapuram in Ranipet, has, from about three decades ago.

The future of the tent talkies, post the lockdown though, remains unknown.

“This is one of the last surviving tent talkies in the district and even in the State. There used to be more than eight such talkies in the locality but all of them have closed down. This is one safe place as they do not allow drunkards, dancing and bursting crackers inside. Now, murukku has been replaced by hot bajji, bonda and tea. Popcorn is a recent addition. Before it closed for the lockdown, the last movie that was screened was MGR starrer Ragasiya Police,” says Mr. Mahesh.

The theatre, which has been in existence since 1987 and is a favourite among villagers, is tucked away in Puttu Thakku village and is situated on a one-acre plot of land. Behind the faded light blue walls of a building, surrounded by yellow compound walls, a huge white screen is located beneath a tin-sheeted roof. Foot marks on the sand inside indicate the number of people who used to throng the talkies.

Seventy-year-old P.K. Ganesan who runs it, claims that he has been running the facility for poor people. He now plans to start a mini theatre with affordable tickets in the same locality or continue to maintain the talkies, on rented land, he says.

Despite the traditional look of the premises, the audience is happy with the sound and light features in the talkies. “The first movie screened here was Vetri Vinayagar. Initially films were used, now we use cube projectors and good sound technology. There are only two classes of ticket – tharai and chair and they are priced ₹20 and ₹30 respectively. Behind the tharai ticket area, is the box with cushioned chairs. The entire capacity is 225 but the space can accommodate over 1,000,” explains Mr. Ganesan.

With the advent of OTT platforms, many theatres have lost their audiences. “But people continue to come here. I do not earn any profit from this but it is a favourite among the poor. They can enjoy the movie with a good breeze from all four sides. Besides, they can have a good time with their family by spending around ₹200 including tea, snacks and tickets,” he says.

Mr. Ganesan said that after COVID-19, the future of the tent depends on the fate of the film industry. “The mini theatre I am planning will also have tickets affordable for the poor,” he claims.

Actor Yogi Babu, who visited the talkies prior to the first lockdown, said that it brought back memories of his childhood. “I was moved when I saw it and I was happy to hear that the owner was not running it for profit. I have even been to such talkies. We used to munch on samosas and have fun watching movies sitting on the floor. We used to laugh and cry together. Now these things are missing,” he says.

The actor says he wants cinema to come back to the theatres again. “Such touring talkies should be preserved as these are places from which the industry grew,” he says.