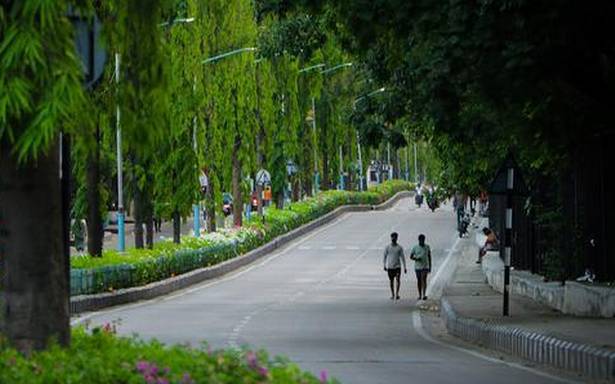 Social media platforms abuzz with pleas to save greenery of Alipiri

The denizens of Tirupati are opposing the move to extend the Garuda Varadhi, the elevated corridor project, up to Alipiri, raising concerns over the consequent loss of greenery.

The Tirupati Smart City Corporation Limited (TSCCL) and the Tirumala Tirupati Devasthanams (TTD) are jointly executing the project. However, the TTD took everyone by surprise by announcing the extension of the project recently.

The 6-km flyover between the Tiruchanur highway junction and Kapila Theertham is meant to provide an easy access to the pilgrims arriving through Chennai and Bengaluru routes to the Tirumala foothills by avoiding traffic congestions. There are also exit routes from Renigunta and Karakambadi meant for vehicles from Vijayawada and Hyderabad respectively. What used to be a 40-minute drive amid heavy traffic in the past is expected to take 10 to 12 minutes, by taking the flyover and avoiding half a dozen traffic junctions.

According to the project plan, the flyover will meet the existing road several metres ahead of Kapila Theertham, from where Alipiri is a 2-km drive – the four-lane stretch is mostly used by vehicles bound for Tirumala.

However, the denizens feel that the project will be of a huge environmental cost. They apprehend that it will adversely impact the verdant hills, picturesque waterfalls and ‘Nagaravanam’ forest trail used by trekkers and walkers.

The social media is abuzz with denizens questioning the rationale behind the project. They argue that it will hardly serve any purpose. “Alipiri is close to our hearts and we don’t want to lose its greenery. We urge the TTD authorities to reconsider their decision,” says Nithin and Prudhvi, administrators of the Facebook page “It’s My Tirupati”. The topic with the hashtag #dontspoilalipiriroadbeauty is trending.

Similarly, change.org, a popular platform used by netizens to express their disapproval over the decisions going against the public opinion, has launched a campaign and more than 9,000 signatures against the move have been collected till date. Rayalaseema Porata Samithi convener P. Naveen Kumar Reddy has warned that he would move the court if the TTD goes ahead with the project. “The extension plan will lead to felling of hundreds of full-grown trees,” he said.