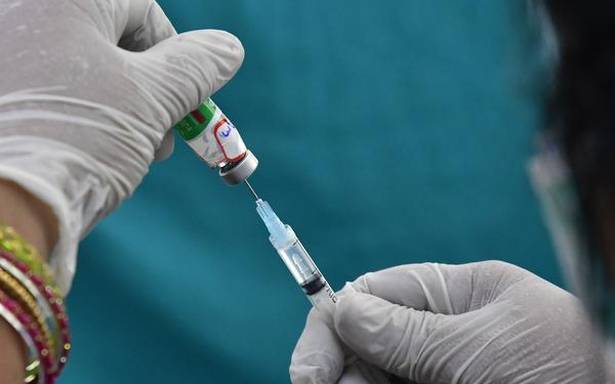 Any such classification will be discriminatory, it tells SC

The Centre told the Supreme Court on Monday that prioritising COVID-19 vaccination on the basis of profession will amount to “discrimination” and is against larger national interests. It was responding to a PIL to include judges, lawyers and court staff in the “prioritised group of population who will get the COVID-19 vaccine first”.

“Any specific classification, either based upon the nature of trade, profession or otherwise, is neither possible nor advisable,” the Union Health Ministry said in its affidavit.

Those in the legal fraternity who were above 60 or between 45 and 59 and suffering from a very long and exhaustive list of comorbidities would in any case be covered by the vaccine drive, the government, represented by Solicitor General Tushar Mehta, reasoned.

Meanwhile, appearing before a Bench led by Chief Justice of India Sharad A. Bobde on Monday, vaccine makers Serum Institute of India and Bharat Biotech said cases concerning vaccines and the inoculation drive had been filed in various High Courts. They urged the Supreme Court to transfer the cases to itself and decide the issue once and for all. “The situation brooks no delay. The issue has to be decided finally,” senior advocate Harish Salve, for the Institute, submitted.

Senior advocate Mukul Rohatgi, for Bharat Biotech, said it would become an impossible situation “if every High Court starts asking us questions about the vaccination — ‘like how much drug will you give, when will you give, etc, etc’. It will be better if Your Lordships call forth all the cases and decide them finally”. Chief Justice Bobde agreed to hear them on March 18.

In its affidavit, the Centre also countered allegations that the domestic immunisation drive was restricted and had taken a back seat to the export of vaccine.

“Export of vaccine is important to simultaneously protect the high-risk population in all countries to break the chain of transmission and minimise chances of import of COVID-19 cases to India. India is not immune to pandemic till the world at large has contained the disease. Low/middle income countries with limited access to pharmaceutical technologies are at a disadvantage to deal with the pandemic. To this end, government has allowed only limited export of vaccines, while according highest priority to domestic needs,” the government said in response to the allegation.

It said the world had to work as a single unit to combat a pandemic. It was not possible to take a country or State-specific approach.

Globally, senior citizens were vaccinated first. The drive would be gradually descending the age ladder. Besides, simultaneous vaccination for everyone would result in commotion and may be a reason for further spread of the virus. There was also a limit to manpower and infrastructure, the government said.

From January 16 to March 6, a total of 2.1 crore doses had been administered to prioritised beneficiaries, the affidavit said.