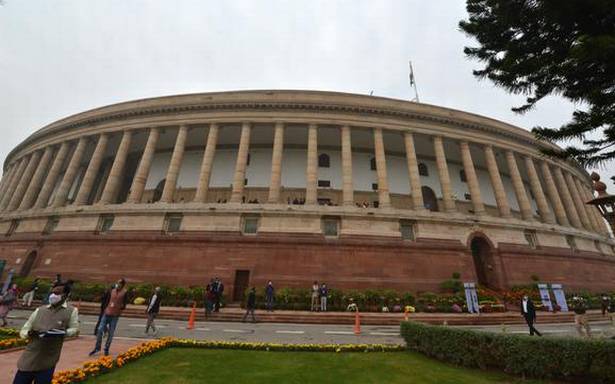 In an unabated war of words between the government and the Opposition, Parliamentary Affairs Minister Pralhad Joshi fired another salvo at Congress chief whip in Rajya Sabha Jairam Ramesh, saying that to err is human but to repeatedly “justify” the wrongs is foolish.

Mr Joshi’s latest remarks follows his Friday statement where he accused Mr. Ramesh of casting aspersions on the functioning of the Rajya Sabha Chairman, calling it a disfavour not only to the truth but to democracy itself.

Tweeting on Sunday, Mr. Joshi said it is the duty of people’s representatives to respect the Chair and behave in a manner worthy of their standing. “However Mr @Jairam_Ramesh, your colleagues chose disruption over debate. It was unfortunate as the whole country witnessed their sheer hooliganism,” he said. He also posted once again, a CCTV footage of the events of August 11, when the Upper House cleared the controversial The General Insurance Business (Nationalisation) Bill, amidst fierce protest from opposition.

Mr Joshi further added, “ To err is human but to repeatedly justify it is foolish.” He said the government was ready to withdraw suspension if the Opposition had apologised.

“You must not lose your way while pleasing RaGa (Rahul Gandhi). Do tell him about respect being commanded and not demanded,” Mr Joshi said.

The Minister’s comments was in response to Mr. Ramesh’s comment on Friday that respect has to be commanded and not demanded.

Responding to the latest comments by Mr Joshi, Mr Ramesh re-posted a letter written by Leader of Opposition Mallikarjun Kharge to Rajya Sabha Chairman Venkaiah Naidu, complaining about illegally circulating CCTV footage of the House proceedings. The letter also had flagged that no officer other than those from Rajya Sabha security personnel should be allowed inside the chambers and lobbies of Parliament. “By putting out illegal footage you are reiterating our point that what were unfamiliar Delhi Police personnel doing in the lobbies that day?”

Mr. Ramesh said the onus is always on the government to ensure that Parliament functions. He reasserted his comments made inside the House that “if the Government is accommodative then Opposition is responsive.”

“Further, you must not lose your way spreading lies to please NaMo(Narendra Modi), who himself is the Jagadguru (world leader) of Jhoot (lies)!” Mr Ramesh tweeted.