Amit Shah is the third person after Rajnath Singh and Nitin Gadkari to bring his political experience of having served as BJP president into the government. 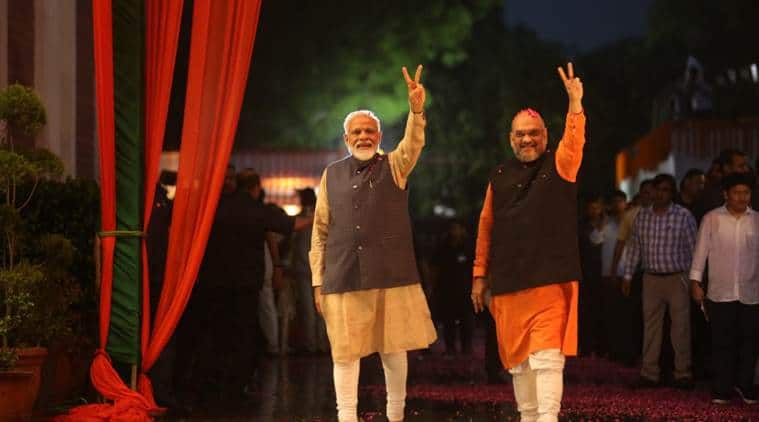 Shah is the third person after Rajnath Singh and Nitin Gadkari to bring his political experience of having served as BJP president into the government.

However, his proximity and the long association with Prime Minister Narendra Modi since their days in Gujarat sets him apart from his senior colleagues in the Cabinet. Though the portfolios for ministers were not announced until late evening, Prime Minister Narendra Modi clearly signalled his political weight in the government by placing him as second most senior in the ministerial pecking order just after Rajnath Singh, Home Minister in the previous government.

“Thankful to Prime Minister Shri @narendramodi ji for reposing faith in me. Your leadership and continued support is a great source of inspiration. I assure you that I will put my best efforts to serve our people and country,” Shah posted on Twitter in his first reaction after his induction into the government.

Although he has been at ease with his organisational responsibility as the party chief since 2014, his entry into the Government marks a significant transition in his political career at the national level.

Given how the BJP campaign leveraged Modi government’s welfare initiatives, Shah’s entry is also likely to help the government to be better coupled with the political demands from the grassroots level.

Several party leaders underlined how Shah brings the wealth of his political experience as party chief into governance. As party president, Shah has travelled to a majority of districts across the country and has held extensive interactions with a network of party organisations across the country. Party insiders said that his “fixation with grassroots politics” is likely to bring a new flavour to policy making in the government.

His entry into the government also leaves the door open for appointment of a new party chief. Pending the conclusion of internal deliberations for his replacement, Shah is likely to continue as party chief.

But party leaders suggested that Shah, the architect of the party’s re-organisation, is likely to retain his influence in organisational work even if he has to leave his post.

Starting as a polling agent of the BJP in the Naranpura ward of Ahmedabad in 1984-85, Amit Shah, 54, has risen through the ranks. He was known in Gujarat as among the most powerful junior home ministers. Police officials who worked under him say he was always the man who “got the job done.” Shah held the portfolios of Home, Law, Prohibition & Excise, and Civil Aviation through his ministerial career of eight years when Modi was Chief Minister in the state.

Shah became a minister in 2002 and remained until 2010 when he had to resign following his arrest in the Sohrabuddin Shaikh encounter case. He spent three months in jail on charges including murder, conspiracy and illegal detention. Later, he was discharged by a special CBI court.

He got his first important government assignment in 1995 when the BJP assumed power in Gujarat. Shah was appointed chairman of the Gujarat State Financial Corporation, a government-run financial institution set up in 1960 under the State Financial Corporation Act, 1951, with a mandate to finance small and medium enterprises. The corporation was headed by prominent businessmen until 970, later by Indian Civil Service or IAS officers or MLAs. Shah was neither, and yet “his experience in handling a financial institution came from here”, says a former BJP minister.

Winning assembly elections from Sarkhej constituency since 1997, Shah was the manager of all L K Advani and Atal Bihari Vajpayee elections from the Gandhinagar parliamentary seat. Shah was also involved with co-operatives in the state and played crucial role in BJP capturing key co-operative institutions controlled by the Congress. Before the decisive 2002 Assembly elections held in the shadow of the Godhra riots, Shah was co-organiser of Modi’s Gaurav Yatra. In 2007, when Modi became chairman of the Gujarat State Cricket Association (GCA), Shah became vice chairman, ending the 16-year Congress domination in the cricketing body.