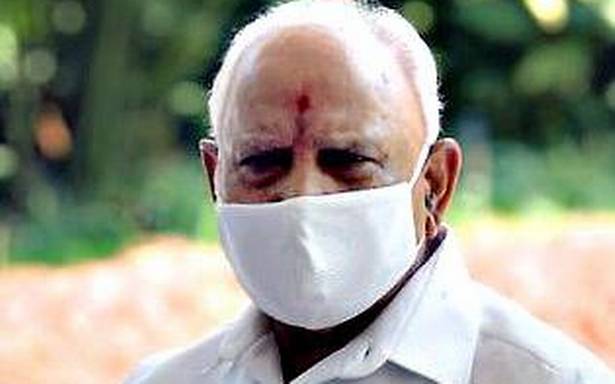 Partymen, both supporters and detractors, rally around Chief Minister

In a first, amidst undying campaigns for leadership change, Chief Minister B.S. Yediyurappa on Sunday spoke of resigning “if the Bharatiya Janata Party high command asked him to”, forcing the party to rally behind him on Sunday.

While his supporters came out in open support, with senior Ministers criticising campaigns for leadership change amidst the pandemic, his detractors, including those campaigning to replace him, were forced to announce he was their leader in the State. Multiple sources in the party see his statement as a careful political strategy to put public speculations over leadership change to rest, by creating sympathy for himself among the public.

Answering a media query on leadership change, Mr. Yediyurappa said: “I will be the Chief Minister of the State till I enjoy the confidence of the Delhi high command. The day they say we don’t need you, I will resign and rededicate myself for the development of the State. I am not in any confusion. They have given me an opportunity that I am working hard to make best use of. The rest is left to the high command”.

Responding to another query on lack the of an alternative leadership in the party, he said he wouldn’t agree that there was no alternative to him in the State, but he would continue to be the Chief Minister as long as the high command wants him to be.

Coming in the backdrop of the high command recently spurning efforts of a lobby to replace him amidst the pandemic and his son B.Y. Vijayendra’s meeting with national president J.P. Nadda, his statement created ripples in the State’s political circles.

The Chief Minister’s supporters were quick to use it to attack his detractors asking them to “put an end to speculations over leadership change”.

Two senior Ministers, R. Ashok and Basavaraj Bommai, close to the Chief Minister, addressed the media and said “The Chief Minister was deeply pained over unending speculations over leadership change, even as he was working tirelessly in the field, despite his age, to fight COVID-19, as reflected in his shocking statement on resignation”.

“The 2018 mandate was for Mr. Yediyurappa and the MLAs also joined us to form the government reposing their faith in him. He will finish the term as the high command has reposed its faith in him,” Mr. Bommai said.

Soon, BJP State president Nalin Kumar Kateel, Union Minister Pralhad Joshi, speculated to be a chief ministerial aspirant, dissident C.P. Yogeshwar, and national general secretary C.T. Ravi, who had been making veiled statements critical of the Chief Minister and suggesting leadership change, all issued statements denying reports of any move to replace the Chief Minister and praised him for his work during the pandemic.