“Imran Khan is no amateur. He used a potent combination — his bonafides as a populist, non-dynastic, clean politician, and his strong ties to the military — to catapult himself to political success. And, of course, his national hero status as a cricket star didn’t hurt his cause either,” Michael Kugelman, Deputy Director of the Asia Programme and Senior Associate for South Asia at the Wilson Center, the Washington, DC, think-tank, tells Rediff.com in the concluding part of his interview.

How would you assess Imran Khan as prime minister? Do you think he continued to be an amateur, out of touch with the rumble and tumble of politics, seemingly lofty and out of touch with the mood — just as he was when he was Pakistan’s cricket captain (he took all the credit when Pakistan won the 1992 cricket World Cup)?

He’s no amateur. You can’t become prime minister without being politically savvy about what it takes to get to that post. For Khan, this has entailed above all changing his position on the military.

He had been on the forefront of anti-Musharraf protests back in the day, but as his political ambitions grew larger, he had to make some course corrections, and he did.

He used a potent combination — his bonafides as a populist, non-dynastic, clean politician, and his strong ties to the military — to catapult himself to political success. And, of course, his national hero status as a cricket star didn’t hurt his cause either.

What has hurt him as prime minister is that he has remained highly partisan, unwilling to work across the aisle and quite content to engage closely only with his partisans and other allies, as well as of course the military.

Khan has also been mercilessly critical of his opponents. There is a Trump-like dimension to the intensity of these attacks. Consequently, he has burned quite a few bridges on the other side of the aisle that could have otherwise been helpful now, a moment when he can use all the support he can get.

Or is he shrewder than the pundits credit him to be? Do you think he continues to be popular? Is he the most popular politician in Pakistan?

These are very political questions. To be sure, his main support base continues to love and respect him for his populism, his defiance, and his stubborn attachment to the anti-corruption platform that has defined him since he first joined politics.

Where he has hurt his cause is his handling of the economy, which has upset many of his supporters. But Khan has cleverly managed to blame the Opposition — its poor policies when in office, the corruption of its leaders which weighs down the economy — in ways that deflect from his failures to solve the economic crisis.

In reality, if the economy is still in bad shape after nearly four years of being in power, then you have no one to blame but yourself. But many of his supporters still place the blame on the Opposition.

For Khan’s detractors, he has been nothing short of a joke — out of touch, inconsistent, and uninformed, with no one to blame but himself for his predicament.

Given how polarised Pakistan’s political environment is, I don’t think there’s any political figure who could be viewed as ‘most popular.’ I doubt it’s Khan, though I can’t think of anyone else either.

Pakistan hasn’t changed that much under Khan — and that’s a blot on his record, given that he took office vowing to make major changes.

He sought to rid the country of corruption, to bring it more in line with Islamic teachings, to create more of a welfare State, and so on. In reality, his record is mixed. His Ehsaas programme, which intends to reduce poverty and strengthen access to health care, is a very real success story, albeit one that has a precedent in the Benazir Bhutto income support programme.

But beyond this, his grand ambitions, to this point, have fallen short.

Aside from the social welfare achievements, many of Khan’s successes have been external. On foreign policy, he has positioned Pakistan to be a bigger player on the world stage by placing the country on the forefront of efforts to pursue debt relief and counter Islamophobia.

Pakistan has strengthened relations with key countries, ranging from Russia to Turkey. And Islamabad has been a key actor in regional diplomacy on Afghanistan.

To be sure, this being foreign policy, some of it was engineered by the military. But it’s happened in the Khan era, and so it reflects well on him.

What, apart from the economic challenges, are the security and other challenges that confront Pakistan?

One of the biggest non-economic challenges right now is terrorism. We’ve seen a dramatic rise in attacks over the last year or so.

In fairness, this resurgence in terror isn’t Khan’s fault; it’s attributable to a new Pakistani Taliban leadership reuniting fractious factions and the Taliban victory in Afghanistan, among other things. But his government’s response has been muddled, if not subdued, with the main focus on pursuing talks with the TTP that are unlikely to succeed, given that the group is demanding major concessions that Pakistan won’t make.

If the incidence of terror attacks continues to rise, and especially if there are more attacks in cities, pressure will mount on Khan to do more, if he’s still in office.

The Baluch separatist movement has also intensified its attacks, and I envision these continuing because Beijing is still pursuing the infrastructure projects that have aggrieved Baloch militants in recent years.

Also, the IS-K threat tends to be overlooked, which is dangerous given that IS-K, largely based in Afghanistan, has benefited from the Taliban takeover and the US departure from Afghanistan.

Prison breaks staged by an advancing Taliban last summer allowed it to replenish its man power, and the departure of NATO forces and collapse of the Afghan military mean that IS-K is no longer getting hit by airstrikes. This gives it space to strengthen.

It will be looking for opportunities to strike in Pakistan, in order to punish the longtime patron of IS-K’s Taliban rival. But again, on this front, Khan’s response has so far been muddled. 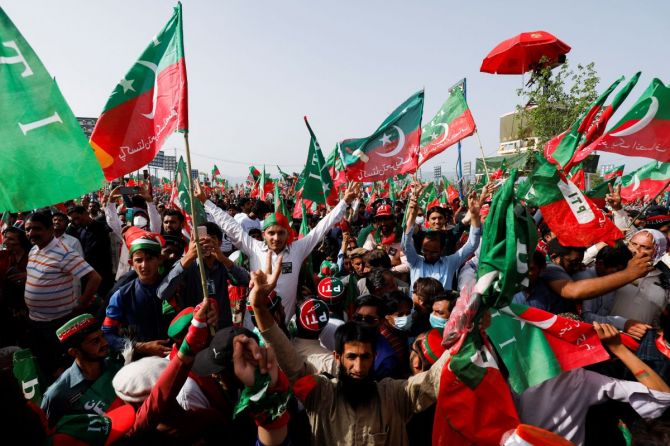 When the Taliban took power in Kabul, Imran Khan was jubilant. Now the Taliban appears allergic to Pakistan, even sending a lower level official, rather than the acting foreign minister, to the OIC meeting.
Why has the Pakistan-Taliban romance been ruptured? Would you blame Imran Khan’s government or the army for this? Could this resurrect the Pakistan Taliban’s threat to the civil and military powers in Pakistan?

My sense is that Islamabad, and especially Khan, misjudged how much the Taliban would assert its newfound independence from Pakistan once the war ended and the Taliban no longer needed sanctuaries in Pakistan.

Recent clashes along the Durand Line, harsh criticism of Pakistan from Taliban leaders — this is all meant to telegraph the Taliban’s independence from Pakistan, in order to help earn legitimacy among an Afghan public that tends to be mistrustful of Pakistan.

There are also actual disagreements between Pakistan and the Taliban — the status of the border, the Taliban’s unhappiness with how Pakistan has dealt with uncooperative Taliban leaders — that have long festered and have come closer to the surface.

I would not argue that the relationship has ruptured, however. Pakistan may have lost leverage over the Taliban now that the group need not be reliant on Pakistani safe havens. But Islamabad has adjusted to develop new tools of leverage. It has become a top diplomatic backer of the Taliban regime. It’s Islamabad that has made the most noise on the global stage calling for the world to engage more closely with the Taliban and provide more financial assistance.

This is important for a Taliban regime that, unlike the group that ran much of Afghanistan in the 1990s, craves international legitimacy and recognition.

Additionally, there may be a role for Pakistan to help rebuild the Afghan military. This would be critical for the Taliban, given that it lacks the capacity to operate airpower — a major deficiency, especially keeping in mind the threat of IS-K, a Taliban rival, and the role of airpower in countering that threat.

At the same time, the Taliban continue to serve an important role for Pakistan. Despite the disagreements and tensions, the Taliban are still by far Pakistan’s best bet in Kabul.

There’s no regime Pakistan would rather see in place there than the Taliban, given the longstanding relationship between the two and the lack of any other alternatives.

Pakistan’s core strategic interest in Afghanistan is a government that’s friendly to Islamabad. The Taliban may not be as friendly with Pakistan as it used to be, but they’re still friendlier than any other option.

So at the end of the day, Pakistan and the Taliban still need each other, and that will ensure the relationship stays strong.

Now, could there be potential game changers down the road that prompt all bets to be off with Pakistan’s relationship with the Taliban?

Sure. If TTP attacks continue to increase in Pakistan, if talks with the TTP remain unsuccessful, and if the Taliban continue to refuse to expel or curb the TTP in Afghanistan, this could prompt Pakistan to launch military operations against TTP targets in Afghanistan.

This has already happened to a limited extent. But if it ramps up, to the point that Pakistan is actively and continuously engaging in military operations in Afghanistan, the Taliban may not respond well. This could have deleterious implications for the relationship with Islamabad. 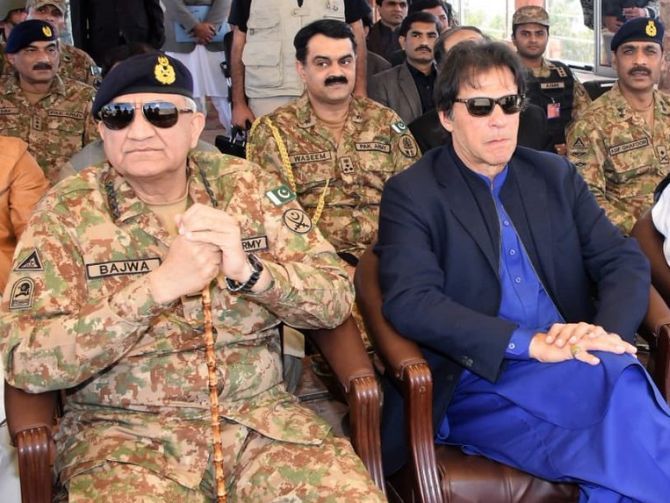 After denouncing the Modi government, Imran has praised India in recent days. How would you read these statements? Are we seeing a thaw in India-Pakistan relations regardless of whether Imran survives in office? Or not?

Khan’s praise of India was a bit of a surprise. I didn’t see it coming. I think, though, that it’s less meant to offer unqualified praise of New Delhi and more meant to buttress Khan’s populist and anti-West rhetoric, especially in the context of the West pressuring Pakistan to take its side on the Ukraine war.

In effect, Khan is telegraphing a message of ‘We are not the West, we have our own interests, and we have no need to give in to what the West wants us to do with our foreign policy. Even India understands this — look what they’re doing with their foreign policy on the Ukraine crisis.’

This also gives Khan another opportunity to take an indirect shot at the Opposition, which Khan has alleged is supported by the West.

And this underscores a simple but critical and enduring fact about Pakistan: Civilian leaderships change frequently, but the military isn’t going anywhere — and neither is its outsize influence on policy. 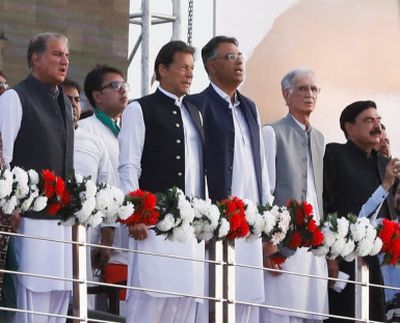