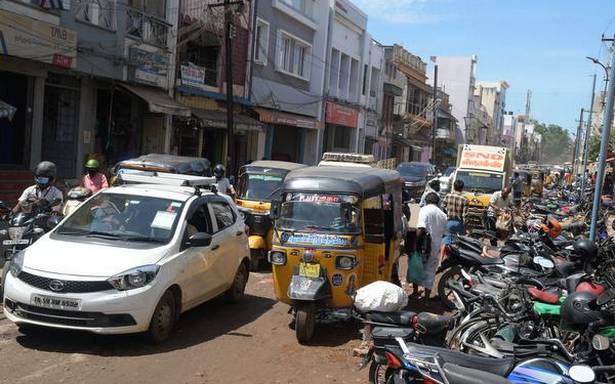 Vehicular traffic increased in most of the roads in Madurai city on Monday, following the ease of COVID-19 lockdown norms.

All stand-alone grocery stores, platform stores selling vegetables, fruits and flowers, which reopened on Monday, saw a good crowd of customers throughout the day.

Nandha Singh, district general secretary of All India Trade Union Congress, said that with the closure of internet browsing centres, the auto rickshaw drivers found it difficult to apply for e-registration.

"The government e-registration website was also mostly dysfunctional," he added.

However, there was poor patronage for autorickshaws due to limited public movement. "The restriction allowing only two passengers to travel in an autorickshaw has also affected the patronage," Mr. Nanda Singh added.

The district administration had directed that wholesale traders of fish markets and slaughterhouses can only function between 12 a.m. and 5 a.m.

M. Selva Kumar, a plumber from S. S. Colony, said that the ease of restrictions permitting electricians and plumbers to work was welcomed. However, there were difficulties in obtaining e-registration, he added.