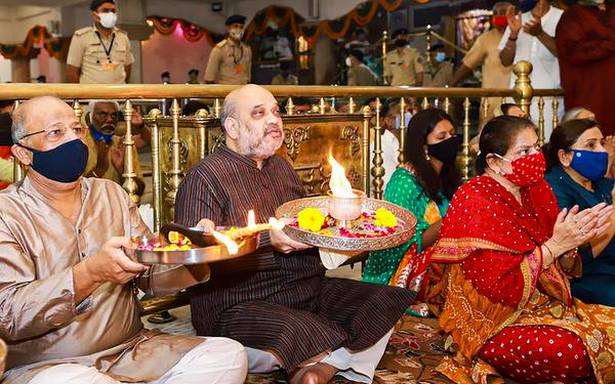 He inaugurates centre for research in narcotic drugs and psychotropic substances in Gandhinagar.

With the growing menace of narcotics, India is facing the danger of narco-terror in which drug traffickers and peddlers further their illegal and disruptive activities using drug money, Union Home Minister Amit Shah said in Gandhinagar on Monday.

Mr. Shah inaugurated the Centre of Excellence for Research and Analysis of Narcotic Drugs and Psychotropic Substances, at the National Forensic Sciences University (NFSU) in Gandhinagar that was set up during Prime Minister Narendra Modi’s tenure as Chief Minister of the State.

“The Centre has decided that we will not let narcotics enter our country and not let India become its pathway. It is important to stop this menace,” he said.

“When the government was formed for the second time under Prime Minister Narendra Modi, it was decided that this Centre should be attached to Gujarat’s Forensic Science University,” he said. The union government, he said, had recognised the university as a national centre of excellence in recognition of its valuable services.

Underscoring the importance of forensic science, the Minister said the government was emphasising on the need to adopt scientific tools for quicker and efficient crime investigations.

“This is not the era of the third degree. We have to organise the criminal justice system. For this, forensic science will play a major role. Our investigation should be based on scientific evidence,” he said. He lauded the forensic science institute in helping in criminal investigations in cyber and drug related offences.