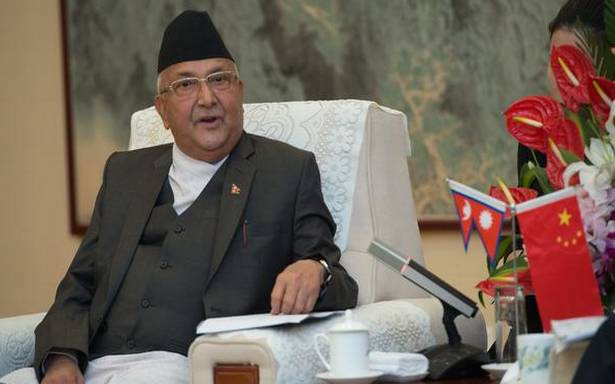 He said the consequences would be negative, says former Nepalese Prime Minister

Prime Minister Narendra Modi’s emissary S. Jaishankar warned against passing the Constitution in 2015, former Nepalese Prime Minister K.P. Sharma Oli has said in documents submitted to his party. The set of “political documents” was submitted to the standing committee of the Communist Party of Nepal-UML which met on September 19. The meeting was called to mark the anniversary of the adoption of the Constitution on Monday.

“The Indian diplomat who arrived as a special emissary of the Prime Minister of India threatened the leaders of the political parties not to promulgate the Constitution and that it would not be accepted if it was done against India’s suggestions,” said the papers from Mr. Oli’s collection. “He said the consequences would be negative” said the documents written in Nepali.

The democratic Constitution was adopted on September 20, 2015 but India till date has not welcomed the development saying it ‘noted’ the Constitution. The adoption took place soon after Mr. Jaishankar, then Foreign Secretary, paid a visit to Kathmandu during which he met the leaders of various political parties including Pushpa Kamal Dahal ‘Prachanda’.

“The Indian government, which has been expressing dissatisfaction that its concerns have not been addressed since the drafting of the Constitution, had put pressure on the government not to adopt it.”

The Constitution drew strong protest from the Madhesis who launched a months long agitation which forced a blockade of vehicular movement from India into Nepal delivering a shock to the Nepalese economy. Ever since the adoption of the Constitution, successive governments in Nepal have promised to carry out amendments to satisfy the demands of greater representation of the Madhesis in politics and state institutions. However, these amendments have not yet been completed.