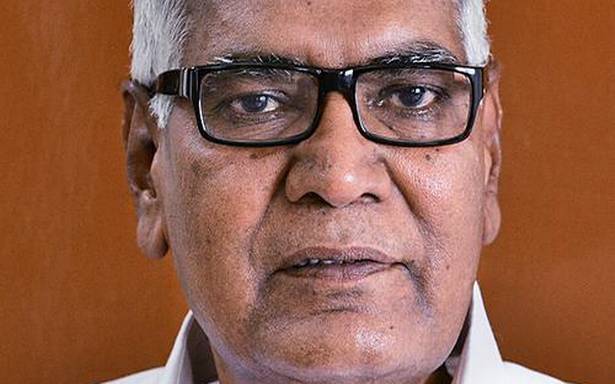 He was not truthful to the party, says veteran Left leader

Minutes after Kanhaiya Kumar joined the Congress, CPI general secretary D. Raja said the former JNU leader had expelled himself from the party and was not “truthful” with the CPI and not “straightforward”with the demands of the party.

“Kumar expelled himself from the party. He was not truthful to the party. The CPI existed long before Kanhaiya came into the party’s fold and will continue to exist after his exit,” Mr. Raja said. He also questioned Mr. Kumar’s faith in the Left ideology. “He must be having personal as well as political ambitions and aspirations. It shows he has no faith in the Left ideology,” he said.

Mr. Kumar reportedly kept denying speculation about his joining the Congress to the CPI leadership. At the same time he refused to attend a press conference to refute the rumours.

“I have been speaking to him and we discussed various issues regarding the party, but he never mentioned anything about his unhappiness or his decision to leave. That is why I am saying he was neither straightforward nor truthful with us. In fact, after the talks of him joining Congress surfaced, I even told him to hold a media conference to deny the news,” Mr. Raja said.

For a long time, Mr. Kumar had many differences with the working of the party. He wanted more control in the decision-making process and ticket selection in Bihar ahead of the Assembly elections last year. In January this year, at the party’s National Council meeting a censure motion was passed against Mr. Kumar for alleged unruly behaviour at the party’s Patna office in December. Mr. Kumar’s supporters had allegedly roughed up the Bihar State secretary for miscommunication about the postponement of the district executive meeting.

Mr. Raja said that he was officially informed of Mr. Kumar’s departure from the CPI through his resignation letter on Monday, a day before he joined the Congress.

On October 2, the CPI’s national council is scheduled to meet where Mr. Kumar’s exit and related issues will be discussed.

At the Congress headquarters Mr. Kumar said his exit will not impact the Left’s future. “The party is far above an individual. The party will remain long after the individual has left,”he said. He also expressed gratitude towards CPI which he said cradled him and taught him the politics of struggle.

“A mother in a remote Baghusarai village must be weeping now, in her heart of hearts. She is none other than Kanhia’s mother. She is not a scholar, nor a speaker. But she is an Anganwadi WORKER who knows the greatness of the flag of the toiling masses. I hold her hands! Mothers are great,” CPI Rajya Sabha MP Binoy Viswam tweeted.