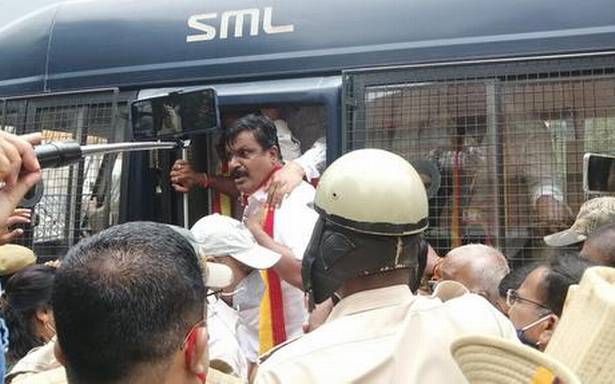 A protest by activists in Belagavi demanding replacement of a torn Kannada flag hoisted in front of the Belagavi Municipal Corporation ended with the police taking them into custody following an altercation.

The contention of the activists, led by Shrinivas Talukar and Wazid Hirekoodi, was that the administration had turned a deaf ear to their repeated pleas to replace the torn Kannada flag.

Police, led by ACP Sadashiv Kattimani, and corporation staff tried to convince the activists to end their protest saying they would take up the issue with the authorities concerned. The activists refused to budge, which led to a heated argument with the police for a few minutes.

When the activists refused to budge, police took 10 of them into preventive custody. They were released later.

On December 28, 2020, activists had hoisted the Kannada flag near the municipal corporation. Marathi groups demanded removal of the flag, which had evoked strong reactions from Kannada activists.