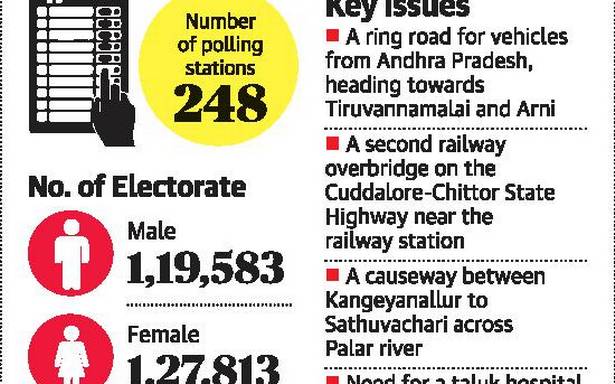 The construction of a ring road to ease traffic congestion and the setting up of a taluk hospital are the key demands of the residents of the Katpadi Assembly constituency. There are around 2.50 lakh voters in the 20 wards of the constituency, which falls under the Vellore City Municipal Corporation.

The busy Katpadi railway station is located on the Cuddalore – Chittoor State Highway. “Traffic is a major problem, especially on the Cuddalore – Chittoor State Highway. There is a need for a ring road, which would ensure that vehicles travelling from Andhra Pradesh to Tiruvannamalai needn’t enter the town. This has to be implemented soon,” said Umesh Kumar of the Jagannatha Nagar Residents’ Welfare Association.

Some residents want a second railway overbridge (RoB) to reduce traffic congestion on the highway. “The existing one was constructed in the 1980s. But the number of vehicles has increased dramatically since then, and the existing bridge seems to have become weak. Hence, another RoB would be helpful,” said Kumar Senthil, a resident of Kangeyanallur.

Residents have also been highlighting the need for a causeway between Kangeyanallur and Sathuvachari across the Palar. “We are having to take a roundabout route to travel between these two places. If there is a causeway, this can be avoided. This has been a long-pending demand of the residents, but no concrete steps have been taken to fulfil it,” said K. Veera Raghavan, another resident of Kangeyanallur.

An underground sewage system is another demand. “As of now, sewage is being discharged into the Palar river bed. There is an urgent need to stop this,” Mr. Veera Raghavan added. “There are too many autorickshaws and school buses plying in a small constituency with narrow, clogged roads. The traffic police should regulate them. Despite Vellore having been declared as a smart city, we don’t see any work being carried out in Katpadi. We don’t even have proper streetlights,” said K. Arunachalam, who works at a college in Katpadi.