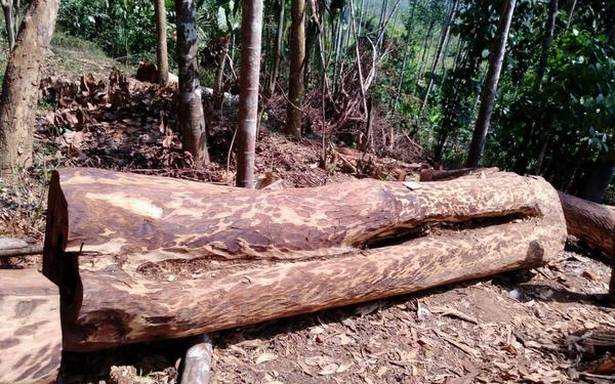 The Opposition United Democratic Front (UDF) members walked out of the Kerala Assembly on Tuesday, accusing the State government of tacitly allowing “politically influential and well-connected timber thieves” to illegally harvest expensive and centuries-old rosewood trees from land assigned to farmers for agriculture in the forested Wayanad district.

Moving an adjournment motion, Congress legislator P.T. Thomas said the Revenue Department had opened the door for illegal logging by issuing a dubious order in October last. The ruling allowed farmers to harvest trees they had grown on the assigned land. Mr. Thomas said the forest mafia had used the order as a convenient cover for felling aged hardwood trees. They did so with the connivance of local forest, revenue and police officials and had recruited “innocent” tribals as lumberjacks.

The crime reported from South Muttil village was just the tip of the iceberg. The government had given cover to criminals to denude the forests of valuable timber.

The accused had used the order to convince unsuspecting farmers to permit the felling of ancient trees from their land for a pittance. They had ferried much of the illegally cut hardwood to foreign markets. Mr. Thomas alleged two “prominent media persons” had oiled the government machinery for the racketeers.

Leader of the Opposition V.D. Satheesan said the Forest Officer, Meppadi Range, had unravelled the crime despite death threats and intimidation from supervisory officers.

“We give a big salute to the officer. He acted while the government slept,” Mr. Satheesan said. He demanded a Statewide investigation into the rosewood theft under direct supervision of the Kerala High Court.

Forest enforcers have named two persons, Roji Augustine and Anto Augustine, as the main accused. They have seized the timber from a depot in Ernakulam. They confiscated 300 cubic metres of rosewood that cost an estimated ₹10 crore in the legal market. Mr. Saseendran said Forest Conservator T.N. Sajan, who allegedly batted for the accused persons, was under investigation.