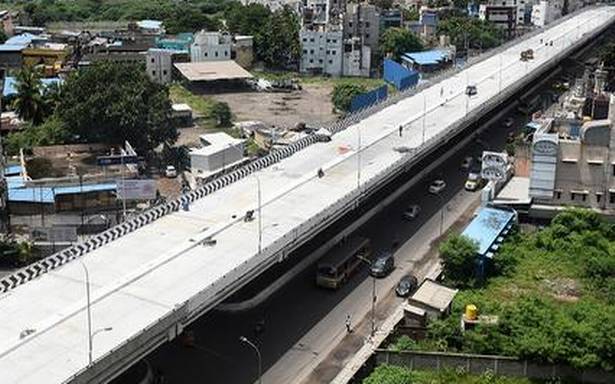 The work on the 1.15-km flyover on Jawaharlal Nehru Salai at Koyambedu will be completed by October-end, Minister for Highways E.V. Velu said on Saturday.

Responding to AIADMK co-coordinator Edappadi K. Palaniswami, he said in a statement that on the instruction of Chief Minister M.K. Stalin, he had inspected the flyover twice since July and directed the officials to speed up the ₹93.50-crore project.

The owner of a building that had encroached upon a portion of the service lane had gone to court, leading to a delay in the completion of the work. The court granted an order in favour of the Department of Highways only on September 29, and the building was being dismantled. The structure of the bridge, of which construction had commenced in June 2018, was complete, he said.

On completion, the four-lane, bi-directional flyover would allow free flow of traffic at the important junction, which is near the Chennai Muffusil Bus Terminus and the Koyambedu vegetable and fruit markets. Around 70% of the over one lakh vehicles proceeding from and to Anna Nagar and Vadapalani would be able to take the flyover instead of waiting at the signal at the junction of Jawaharlal Nehru Salai and Kaliamman Koil Street.

The Minister said level 2 of the ₹109-crore flyover at the Velachery junction would be ready by this month-end, and the first level by the year-end. Residents of localities, including VGP Selva Nagar and LIC Colony, have urged the Department of Highways to provide a U-turn beneath the flyover. The approach road to the ₹133.10-crore flyover at Medavakkam was being laid, and it would be completed by this year-end.

Mr. Palaniswami called upon the government on Friday to inaugurate a few flyover projects in Chennai.