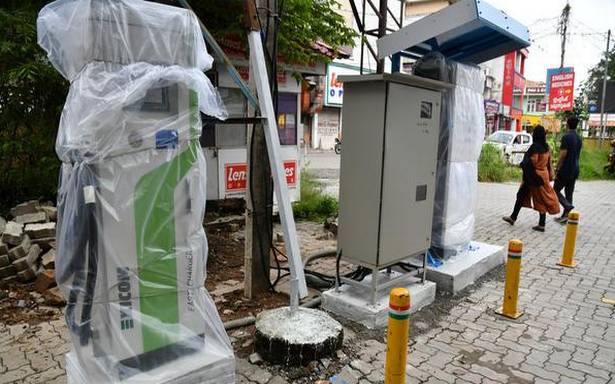 Under this programme, 200 e-vehicles, sedan type, will be hired for the officer category in the first phase.

Taking the lead in promoting e-mobility in the State, the Kerala State Electricity Board (KSEB) has drawn up a plan to replace diesel and petrol vehicles in its fleet with their electric counterparts.

The board of directors of the state power utility has given the go-ahead for hiring electric vehicles for the use of its senior staff and the 770-plus electrical section offices and other field offices across Kerala.

Under this programme, 200 e-vehicles, sedan type, will be hired for the officer category in the first phase. This will be followed up with the hiring of 1000 special-purpose vehicles for the section offices, according to a decision taken by the board.

The KSEB, which manages power generation, transmission, and distribution, has a large number of vehicles for official use, a majority of which are hired, a KSEB official said. The replacement of these hired internal combustion engine-powered automobiles with their e-cousins will be executed in a phased manner starting with the field offices of Deputy Chief Engineers and Executive Engineers.

For the e-mobility programme, the state utility is looking at vehicles having a battery capacity of above 25 kWh and 300 km-plus range.

Since the transport sector accounts for 18% of the total energy consumption in India, e-mobility presents a viable alternative given the country’s Climate Change commitments and the need to reduce fossil fuel consumption, the KSEB noted.

On a related front, the KSEB is in the process of establishing 56 electric vehicle charging stations across Kerala. Under the state’s e-vehicle policy, the KSEB is the nodal agency for establishing EV charging infrastructure. Forty of the stations are expected to be ready by November.

As part of this programme, the state-run utility has also announced plans to introduce charging points on electricity poles. Ten such charging points will be established in Kozhikode city under a pilot programme.