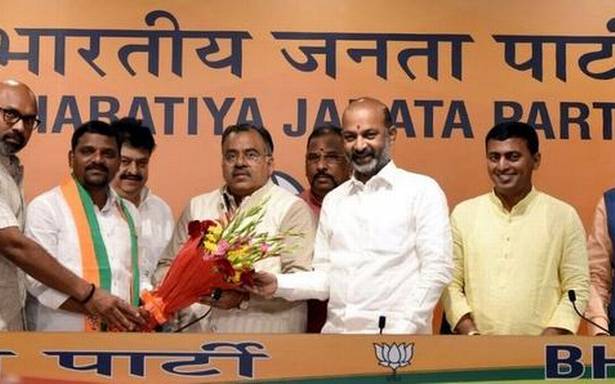 Body shaming of teenaged son of IT Minister and Telangana Rashtra Samithi (TRS) working president K.T. Rama Rao in a Twitter poll run by YouTuber Teenmar Mallanna, who recently joined the Bharatiya Janata Party (BJP), has created a storm with leaders from various political parties and Twitterati objecting to the language.

Mr. Rama Rao took to Twitter to ask BJP president J.P. Nadda whether the party teaches such behaviour to its leaders in Telangana. Sharing the screenshot, he asked Is that the culture the BJP preaches to body shame a young boy through ugly political comments. “You don’t think we could reciprocate in the same coin against Amit Shah Ji’s or Modi Ji’s family?” the Minster asked in the tweet.

In another tweet he warned that they would be compelled to take legal action and they should not be blamed when they were forced to respond with equal vigour. Getting little philosophical, he said: “At times I wonder whether it’s worth being in public life when kids are drawn into this cesspool of YouTube channels that dish out 24/7 nonsense in the guise of journalism.”

Mr. Rama Rao was enraged by a Twitter poll on Q News Youtube channel run by Mr. Mallanna where he asked whether development happened in the temple of Bhadrachalam or inside the body of KTR’s son sharing a picture of the boy and relating it to development promise of the historic Ram temple in Bhadrachalam.

TRS followers and others widely shared the tweets seeking action against Mr. Mallanna. Later, in the night a group of youngsters stormed Mr. Mallanna’s office and damaged the computers and furniture apart from manhandling him with threatening gestures.

Meanwhile, political opponents and family members extended their support to KTR and derided the mindset of drawing children to settle their political and personal grudge.

KTR’s sister and Member of Legislative Council Kalvakuntla Kavitha tweeted saying: “You know when they run out of reasons to tarnish you, they target your family.” TRS Minister and KTR’s cousin T Harish Rao said: “Dragging families and finding ways to humiliate them and now oiling their social media machinery is a well known strategy of the BJP.”

Support also came from political opponents like Chief of YSR Telangana Party Y.S. Sharmila who said whether it is belittling women or body-shaming kids all must come together to call out such statements irrespective of political affiliations. Former IPS officer and Bahujan Samaj Party (BSP) leader Praveen Kumar also condemned the derogatory remarks.

Meanwhile, the BJP leaders remained silent on Mallanna’s tweet but tweeted condemning the attack on Mallanna and his office.

Amidst this controversy, KTR left for Goa to celebrate his daughter’s birthday.