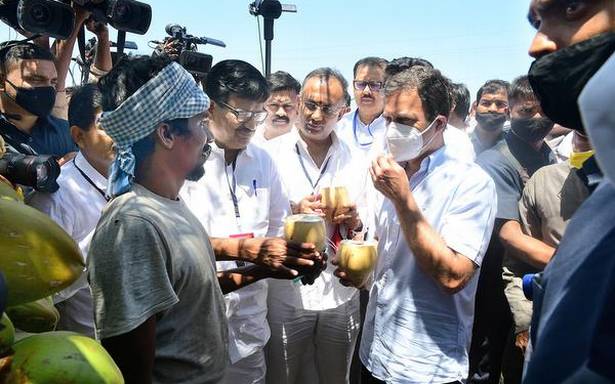 Instead of dictating terms to Tamils, as he is doing to the Chief Minister of Tamil Nadu, Prime Minister Narendra Modi should keep quiet and open his ears to win them over, as was done by late Chief Minister K. Kamaraj, Congress leader Rahul Gandhi said.

“Kamaraj listened to the people to evolve great ideas like mid-day meal scheme that feeds crores of poor students across the country. He has become the greatest leader to be remembered even now and won the hearts of Tamils. If you (Mr. Modi) want to win the hearts of Tamils, keep your mouth shut and open your ears to listen to them so that you can win over them,” he said.

Stating that the Prime Minister was dictating terms to Chief Minister Edappadi K. Palaniswami, Mr. Gandhi said that he cannot dictate terms to the people of Tamil Nadu.

Mr. Gandhi was continuing his campaign in Tirunelveli and Tenkasi districts for the second day on Sunday.

At Paavoorchathram in Tenkasi district, Mr. Gandhi said the Prime Minister should understand that the Tamils, their language and their culture should be respected. They would reciprocate with a lot of love. If Mr. Modi chose to dictate terms to them it would prove to be counterproductive.

Charging him with thrusting the ‘one nation, one culture and one language’ formula, the Mr. Gandhi said the Prime Minister should learn to respect the culture of all States, all languages and all religions. Only that could take the country forward. The Congress leader also said the Chief Minister, instead of bowing his head in front of Mr. Modi because of his corrupt administration, should bow the head in front of Tamil Nadu with all humility to get their support.

“If you are not ready for it, the people of Tamil Nadu will never vote for you as they are sure to remove the battery in the remote control unit in the hands of Mr. Modi,” Mr. Gandhi said.

‘Modi will be defeated’

Later, at Palayamkottai, Mr. Gandhi said the country had defeated the British empire 70 years ago to become an independent nation. Likewise, Mr. Modi too would be defeated by the people, he added.

Addressing the ‘Educators’ Meet’ at St. Xavier’s College, where he interacted with the professors of various colleges, Mr. Gandhi said independent India was fighting a formidable enemy. The country, which had defeated a much bigger enemy 70 years ago, would repeat it, again through non-violence

“People of the country sent the British back. The same way we will send him back to Nagpur (RSS headquarters)… We will do it without any hatred, anger and violence. They can do whatever to us. Abuse, kick and spit on our face. We will not do it back,” he said while answering a question on the introduction of New Education Policy.

The NEP that was forced on the nation amid COVID-19 without any proper discussion in Parliament was aiming at promoting single ideology that would destroy the country’s education system.

“Education, farming and healthcare should never be a commercial commodity as all these quality products should be made accessible to everyone,” Mr. Gandhi said.