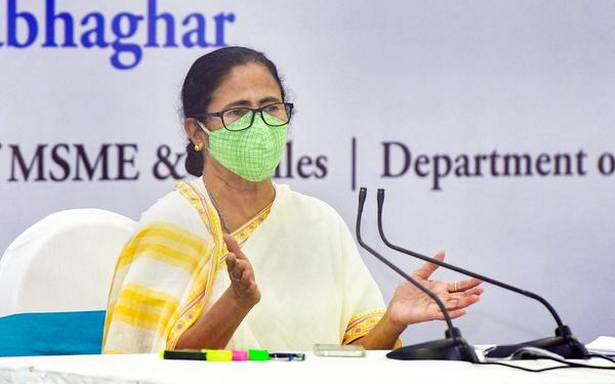 Why Centre is not holding talks with then for past seven months, she asks

West Bengal Chief Minister Mamata Banerjee on Wednesday extended support to the farmers protesting against the three Central farm Bills. She said she would write to the Chief Ministers of the Opposition-ruled States to support the cause of farmers.

During the day, Ms. Banerjee met leaders of the Samyukt Kisan Morcha, including Rakesh Tikait, at the State Secretariat. He congratulated her for her landslide victory in the Assembly polls. After defeating the BJP, Ms. Banerjee should now strive for making West Bengal a model State for farmers, farm leaders said.

“We have been supporting the protesting farmers from the start. We also passed a resolution in the Assembly against the Bills,” Ms. Banerjee said. Farm leaders requested her to visit Delhi after the COVID-19 situation improves.

The Chief Minister stated that she would take the initiative so that she could have a meeting with the Chief Ministers of the Opposition-ruled States on the issue. She asked why the Centre was not holding talks with the protesting farmers for the past seven months.

The Chief Minister also took on the Centre on GST on COVID-19 vaccines. “Imposing GST on vaccines is like playing with the life and death of people,” she said. Why vaccines were not routed through States, she asked.