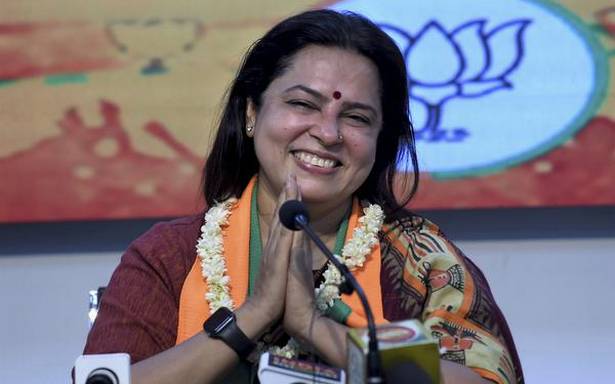 Minister of State for External Affairs Meenakashi Lekhi arrived here as she begins her official visit to Colombia and New York during which she will participate in a UN Security Council meeting on peacekeeping and interact with members of the Indian diaspora.

Ms. Lekhi will first travel to Colombia from September 4-6 where she will call on the country’s top leadership and hold bilateral discussions with Vice President and Foreign Minister Marta Lucia Ramirez and exchange views on regional and international issues of mutual interest.

During her visit to New York from September 7-9, Lekhi will participate in the Security Council Ministerial Open Debate on ‘Transitions’ under the agenda item ‘United Nations Peacekeeping Operations’ that will be convened on September 8 under the Council’s Irish Presidency.

“During the visit to NY, I will participate in the UNSC Open Debate on ‘Transitions’ under the agenda item ‘United Nations Peacekeeping Operations’. I will also interact with members of the Indian community,” Ms. Lekhi tweeted on September 3 as she arrived here to begin her first overseas visit as Minister of State to Colombia and New York.

She is expected to meet with senior UN leadership and interact with the Indian community in New York, in celebration of the Azadi ka Amrit Mahotsav, the commemoration of the 75th anniversary of India’s independence.

After her arrival here on September 3, Lekhi addressed a few members of the Indian community at the ‘Jan Aashirwad Abhar’ event organised by Jaipur Foot USA and Gracious Givers Foundation in the city.

In her remarks, Ms. Lekhi spoke about the devastation caused around the world by the COVID-19 pandemic, which she said ravaged even the strongest nations in the world.

Emphasising that Indians have a "very strong character”, she said India and its citizens bravely faced the challenges and emerged from them.

Lauding the contributions of the Indian-American community, she said the diaspora acts as goodwill ambassadors for the country and have contributed significantly towards finding solutions to combat society’s problems.

Speaking at the event Jaipur Foot USA chairman Prem Bhandari voiced gratitude for the Ministry of External Affairs (MEA), Home Secretary Ajay Kumar Bhalla, Foreign Secretary Harsh Vardhan Shringla and Civil Aviation Secretary Pradeep Singh Kharola for their support in helping alleviate the difficulties faced by the Indian diaspora due to the lockdowns and travel restrictions put into place during the pandemic.

He also spoke about the partnership between the MEA and Bhagwan Mahaveer Viklang Sahayata Samiti-BMVSS, the parent organisation of Jaipur Foot USA, for the India for Humanity initiative under which prosthetics fitment camps have been conducted to help differently-abled people around the world.

These camps were fully sponsored by the Ministry of External Affairs and materialised by Bhagwan Mahaveer Viklang Sahayata Samiti.

Mr. Bhandari said that on August 5 last year, the agreement between MEA and BMVSS was further extended and one camp has already been conducted in Uganda despite the COVID-19 pandemic.

He said that Jaipur Foot USA is working under the guidance and mentorship of the founder and chief patron of BMVSS, Dr. D.R. Mehta to expand outreach of the prosthetic limb within India and abroad.

A press release issued by the Ministry of External Affairs said that during her visit to Colombia, Ms. Lekhi will also be interacting with leading Indian and Colombian companies and the Indian Community residing in the country.

In 2019, India and Colombia celebrated 60 years of their diplomatic relations, the MEA statement said, adding that Colombia is an important partner of India in Latin America and "our relations with Colombia have been expanding particularly, in the economic and commercial sphere.” Bilateral trade with Colombia for the year 2020-21 stood at $2.27 billion, which is a significant increase from $1.85 billion over 2019-20 despite disruptions caused by the Covid-19 pandemic.

Ms. Lekhi’s visit to Colombia “would provide an opportunity to review progress in our bilateral relations and further expand and strengthen this important partnership,” the MEA statement said.