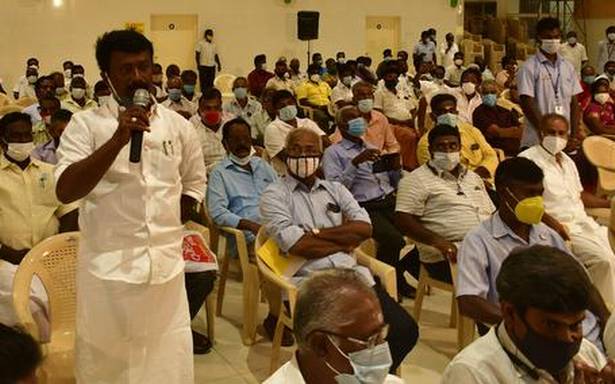 Acceptance from certain quarters, stiff opposition, dissenting notes and demonstrations marked the public hearing held here on Tuesday on the government’s proposal to merge the village panchayats in the peripheries of the city with Tiruchi Corporation.

A large number of residents and elected representatives of the villages took part in the public hearing.

In his introductory remarks, Mr. Sivarasu said the State government proposed to expand the limit of Tiruchi Corporation by merging about 25 villages, which had been marked by rapid urbanisation. The last delimitation exercise was taken up in 2011. It was inevitable to merge the eligible villages with the Corporation to create better basic amenities. The residents of the villages could get better roads and could be served better in terms of protected water supply and solid waste management. The benefits of the underground drainage facility could also be passed on to the proposed areas to be merged with the Corporation.

While a section of the participants came out in support of the expansion proposals, there were voices of stiff opposition too.

The residents of Navalpattu village and Puthu Theru, who had staged a number of protests against the expansion plan, pointed out their reservation in the public hearing.

They said that the villages were totally backward and they were dependent on agriculture and the 100-day Mahatma Gandhi National Rural Employment Guarantee Scheme. Merger would deprive them of the livelihood from the 100-day guaranteed job.

M. Chandru of Kilakuruchi near Thiruverumbur, a ward member, said that none of the residents wanted the merger. The officials had failed to listen to their grievances. In spite of the oppositon, steps were being taken to merge the village with the Corporation, he complained.

Sundaram of Kallakudi said his village had no sign of urbanisation. It had several lakes and ponds. The present status of village panchayat should not be altered.

Shortly after the public hearing, a large number of residents of Kilakurichi and Nathamadipatti staged a demonstration on the premises of Kalaiarangam, protesting against the merger plan. Some complained that the public hearing was an eyewash.

It was over within 45 minutes, they complained, saying they should have been given sufficient time to express their views.

When the public hearing was on, the residents of Madakudi near Samayapuram staged a demonstration in the village against the plan of merger.

Responding to opposition and demonstrations against the merger plan, Mr. Sivarasu said that the guidelines issued by the State government would be followed in the delimitation process. No villags, which had a population of less than 386 per sq. km would be merged with the Corporation or municipality. It was necessary that 75% of the population should be involved in non-agricultural activities for a village to be merged with the Corporation.

Representations had been received from Navalpattu, Punganur and Madhavaperumal Koil against the merger. The residents could also express their views in the coming grama sabha meeting on October 2. The genuine demands would be considered before finalising the proposal, the Collector said.