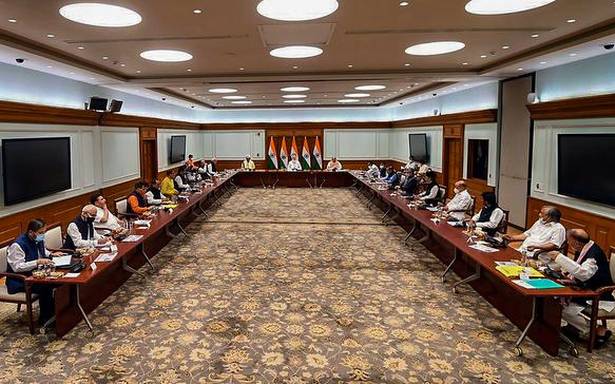 Prime Minister Narendra Modi reiterated his government’s commitment to fostering grassroots democracy in Jammu and Kashmir during his meeting with 14 leaders of eight mainstream political parties even as he sought their cooperation in first completing the delimitation exercise for Assembly seats in the Union Territory, which would eventually lead to elections.

The Pakistani-origin Canadian businessman Tahawwur Rana, who is sought for his involvement in the 2008 Mumbai terror attack, will remain in the United States as a federal judge in Los Angeles weighs whether he will be extradited to India for his alleged role in the terror attack that killed more than 160 people.

Bipartisan infrastructure deal but key Republicans are not on board

U.S. President Joe Biden’s infrastructure plan appeared to be closer to fruition as a bipartisan group of Senators , on Thursday, reached an agreement that would cost $1.2 trillion over eight years, including more than half a trillion dollars in transport and infrastructure spending.

Union Education Minister Ramesh Pokhriyal ‘Nishank’ will interact with students through social media on Friday and answer queries related to Class X and XII Board Examinations, which were cancelled in view of the COVID-19 pandemic.

Monsoon unlikely to pick up until July

Monsoon rainfall that was 40% above normal for the month until June 18, has reduced to a trickle over the previous week. The latest update from the India Meteorological Department (IMD) computes the monthly rainfall until June 24 to be just 26% of the normal and there is unlikely to be a significant boost until the first week of July.

Bharat Biotech, the manufacturer of Covaxin, may not be given full licensure for its COVID vaccine just yet, said a senior health official, saying the vaccine will continue to be used under emergency authorisation.

In contact with various stakeholders on Afghanistan, says MEA

India on Thursday said it is in contact with “various stakeholders” in and around Afghanistan confirming that South Block has adopted a broad-based approach to discuss the future of Afghanistan and the region around with various parties involved.

Tamil Nadu’s revenue deficit of ₹23,459.44 crore during 2018-19 was understated by ₹3,757.23 crore and fiscal deficit by ₹1,300.49 crore primarily owing to short transfers totalling ₹1,366 crore towards various reserve funds, such as sinking fund and guarantee redemption fund, according to the Comptroller and Auditor-General’s report on State finances for the year ended March 2019.

The Delhi Police Special Cell has arrested four students from Ladakh in connection with the Israel embassy blast case, police said on Thursday. They were arrested from Kargil and taken to Delhi on transit remand, they said.

In a fervent appeal to the Prime Minister to end the deadlock on the farm laws, Rashtriya Lok Dal president Jayant Chaudhary said on Thursday that “policy measures can only be termed as reforms only if they satisfy the larger social good.”

The Army has issued a tender — Request For Information (RFI) — for the procurement of 1,750 Futuristic Infantry Combat Vehicles (FICVs) to replace the Russian-origin infantry vehicles in service.

President Gotabaya Rajapaksa on Thursday pardoned 94 persons, including 16 ‘political prisoners’ and one prominent murder convict on death row, on the occasion of the ‘Poson Poya [full moon]’ day that bears religious significance, marking the arrival of Buddhism to Sri Lanka.

After leading his side to its first ICC Trophy in 21 years, Kane Williamson said it was finally good to end up on the right side of a final after losing the last two 50-over World Cup finals in 2015 and 2019.