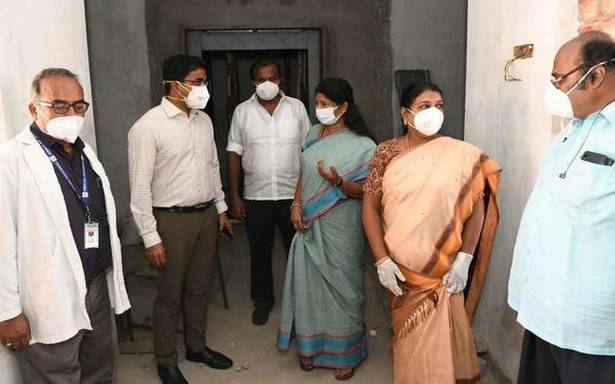 Urging the Central government to immediately provide medical supplies for patients diagnosed with black fungus, Thoothukudi MP K. Kanimozhi on Sunday said that like Tamil Nadu, many States were waiting for the drugs.

Speaking to reporters, she said that the drugs, according to the Health department officials, had to be imported. If there was any delay, the Central government should examine the modalities to manufacture these drugs for black fungus indigenously. Many inpatients across the country were waiting for the drugs.

Under such circumstances, the doctors and the government hospitals should not be blamed. The doctors and frontline workers were giving their best to save lives. Risking their lives, they were working hard and the results of a declining trend in COVID-19 positive cases should be attributed to the frontline workers, Ms Kanimozhi said.

The MP visited the Government Medical College Hospital campus here to inspect the civil works for installation of a lift. An additional block 200 bed with oxygen facility was coming up at the nurses quarters, which has been converted into a COVID-19 ward last year. For this purpose, the MP had released ₹ 50 lakh from the MP fund for installation of the lift. The works were in the final stages, officials said.

Later, the MP, wearing a PPE kit, entered the COVID-19 ward and interacted with the inpatients there. According to the doctors, the MP, inquired whether they were getting food and medical supplies on time. The grievances, she said, would be redressed by doctors.