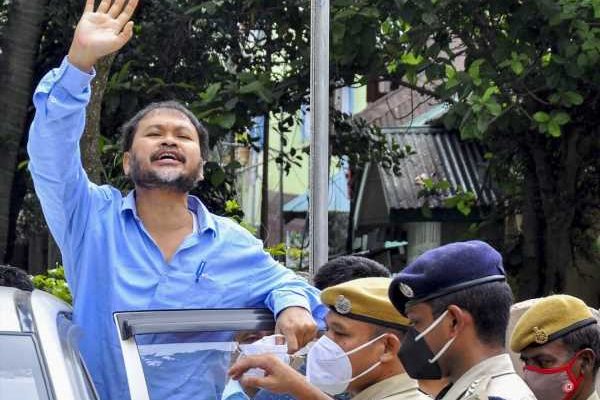 Labelling the NIA as a ‘mere political tool’ of the Bharatiya Janata Party government at the Centre, the Independent legislator from Sibsagar constituency said the judgment will be a landmark for those arrested through the misuse of the two anti-terror laws.

“My case proves the gross misuse of the UAPA and the NIA Act. The verdict will be a milestone for those arrested through the misuse of the two legislations,” the anti-Citizenship (Amendment) Act activist told PTI in an interview after 567 days of imprisonment.

Gogoi, who walked free on Thursday after being arrested on December 12, 2019 for his alleged role in violent anti-CAA stir in the state, said that the Special NIA court’s verdict is historic because it exposed the NIA, which has become a ‘political agency’ like the Central Bureau of Investigation and the Enforcement Directorate.

“Even on Thursday, the NIA wanted to slap a fresh case but by the time they reached the court with the appeal, the verdict was already out,” he said.

In an additional chargesheet filed by the NIA on June 29, Gogoi alleged that ‘false charges of honey trapping, cow smuggling and training at a Maoist camp’ were brought against him.

The Raijor Dal chief alleged that the NIA had offered him instant bail if he agreed to join the Rashtriya Swayamsevak Sangh or BJP, a charge levelled earlier by him in a letter written from the prison in May.

“When they took me into custody, their only question was whether I would join the RSS. Not once had they asked anything about my alleged links with Maoists. My CIO D R Singh never spoke about red rebels before me. He said that if I joined the RSS, I would be released in 10 days.

“When I replied in negative, he offered me to join the BJP and become a minister. I refused that too. He then said that I would be jailed for 10 years,” Gogoi said.

He said the Special NIA Court’s judgment is a ‘turning point’ in the judiciary as it shows that the ‘pressure of the executive’ is not permanent.

The court of Special NIA Judge Pranjal Das observed that there was nothing to indicate that the ‘talk of blockade’ threatened the country’s economic security or was ‘a terrorist act’.

In a strongly worded judgement, the court said that in the interest of justice, it has found the conduct and approach of the investigating authority in this case to be ‘discouraging’, to say the least.

“The court has high expectations from a premier investigating agency like the NIA, entrusted with the profoundly important task of protecting our country and us, citizens from the menace of terrorism.

‘The court hopes and expects that, such high standards will be upheld, for sake of the country and this one will be just an exception,’ Special NIA Judge Pranjal Das said in his order copy.

Gogoi became the first person in Assam to win an assembly election from behind the bars in the recently concluded polls.