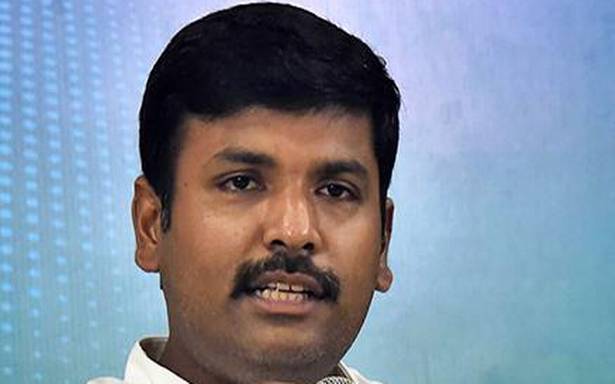 Anakapalle MLA Gudivada Amarnath has alleged that the TDP, which has no interest in saving the Visakhapatnam Steel Plant (VSP), is trying to gain political mileage by making baseless allegations against Chief Minister Y.S. Jagan Mohan Reddy.

Addressing a media conference here on Sunday, Mr. Amarnath said TDP national general secretary Nara Lokesh was either feigning ignorance or was unaware that his father and former Chief Minster N. Chandrababu Naidu had not opposed the decision to privatise VSP, when the proposal was floated by the Centre in 2014. He said that the same was reported by national dailies, including The Hindu, on July 30, 2014.

He also alleged that the representatives of POSCO had met Mr. Naidu in 2018 in the same way as they met Mr. Jagan last year.

Any decision on the VSP could be taken only by the Centre but not the State government and Mr. Lokesh seems to be ignorant of it.

While Mr. Naidu had not even opposed the decision to privatise VSP, Mr. Jagan had written to the Prime Minister suggesting three alternatives to continue it in the public sector.

Mr. Amarnath alleged that 54 PSUs in the State were privatised during the tenure of Mr. Naidu. These include Hindustan Zinc Limited (HZL) in Visakhapatnam and a number of cooperative sugar factories were closed in combined State during the tenure of Mr. Naidu, he added. He recalled that former Chief Minister Y.S. Rajasekhara Reddy had prevented the privatisation of BHPV and HSL in Visakhapatnam.

Mr. Naidu, who had failed to take upon himself the responsibility of protecting the VSP or securing captive mines for the plant, and the TDP leaders were now shedding crocodile tears to gain political mileage.

Mr. Amarnath also alleged that Mr. Lokesh’s landing out of the blue in Visakhapatnam and visiting only the indefinite hunger strike camp of TDP leader Palla Srinivas and not visiting the hunger strike protests, being staged by various trade unions and employees, to express solidarity with them indicated his sincerity towards protection of the Visakhapatnam Steel Plant.