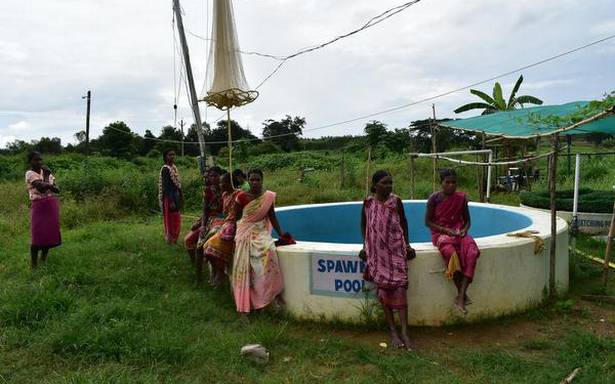 12 government departments and 15 entrepreneurs are working with 5,000 farmers, artisans and women self-help groups in the ‘Nabarangpur model’

In 2019, a consortium of 12 national research and development laboratories joined hands in a rare effort to transform livelihoods in Odisha’s Nabarangpur, one of India’s poorest districts. Two years later, the interventions appear to be creating quite a stir.

With 56% tribal and 15% Dalit population, Nabarangpur has the lowest per capita income of ₹14,700 per annum in Odisha (at 2004-05 prices), and 50% of its working population does not have any work. At the bottom in almost all social indicators, it has been identified as an aspirational district by the Centre.

Nabarangpur, where little happened till a couple of years ago, now has 5,000 farmers, artisans and women self-help groups involved in livelihood generation with 12 government departments and 15 entrepreneurs.

Three-day-long training by scientists of the CFTRI propelled Albedin Bagh, 30, from being a housewife to a chocolate maker in the district headquarter town of Nabarangpur. Her handmade chocolates help her earn her ₹30,000 a month. “As I have got a fair idea about the market, I intend to switch to automation this year itself,” said Ms. Bagh. The CFTRI has formally transferred nine processes and technologies in favour of Nabarangpur’s new entrepreneurs.

Nabarangpur’s almost non-existent fish market, which was heavily dependent on imports from Andhra Pradesh, is likely to see local fish flooding it in a year or two. “For procuring good quality spawn and seeds, we used to travel hundreds of kilometres to Pakhanjore in Chhattisgarh, or Kolkata. After the CIFA conducted a number of refreshers’ courses and live demonstrations on scientific fish farming, I have expanded my operations,” said Sujit Das, who runs a hatchery at Umarkote. Mr. Das, who has invested ₹10 lakh in the hatchery, said he might achieve break even this year itself, if things move as planned.

“We have been able to set up the entire fish value chain in Nabarangpur by establishing aquaculture clusters through hatcheries. Apart from providing government subsidies, our intention is to germinate entrepreneurial zeal among youths. We have succeeded to a far extent,” said Nagesh Kumar Barik, scientist at CIFA.

CIMAP, meanwhile, is promoting cultivation of lemon grass, Japanese mint and vetiver, and seeing the promise of a better return, farmers here are replacing eucalyptus plantations with the aromatic plants. A common facility centre to help entrepreneurs in packaging and branding may soon be set up in Nabarangpur at a cost of ₹30 lakh. Products such as aroma therapy diffusers and room sanitisers, and mint chocolates, are scheduled to be launched later this month.

CIMAP’s high-yielding curcuminoid-rich variety of turmeric named ‘CIM-Pitamber’, and the NBRI’s ‘Keshari’ variety of turmeric have also been introduced in Nabarangpur. Women SHGs have been asked to donate seeds after the annual harvest to prospective farmers, which would lessen their dependency on the market. This innovative idea has been received well.

Encouraged by the national labs’ interventions, Krushna Chandra Nayak, a young entrepreneur, has mobilised investment to the tune of ₹7-8 crore for manufacturing bio-fertilizers used in farming spices and aromatic produce.

“We had never expected such a response from farmers and entrepreneurs to our interventions. Government and other agencies must pitch into create a sustainable market for the products so that the interventions, which was meant for demonstration purposes, could spread among the masses,” said S.K. Mishra, project coordinator and former scientist with the IMMT.

Almost all line departments in the district have involved themselves in the livelihoods mission promoted by the research institutions. Backward districts such as Koraput and Nupada are also evincing interest in replicating the “Nabarangpur model”. Research and welfarism, the collaboration tries to show, are not incompatible.