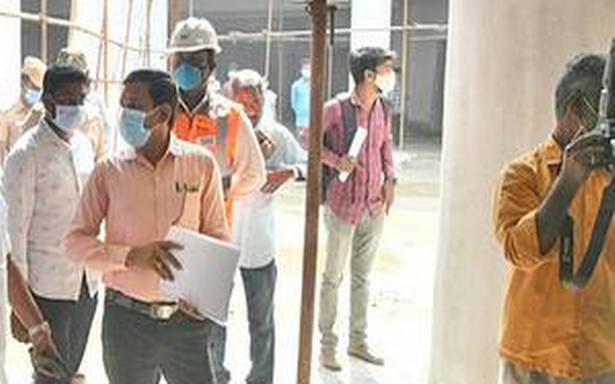 Besides parking lot and restaurants, free wi-fi facility is likely to be offered

Close to two years after the foundation stone was laid in February last year (2020), the ₹51-crore integrated bus terminus, off the Benguluru Highway (NH:48), in Vellore will be ready by March-end.

At present, about 80% of the work, including the construction of the terminus, bus bays, shopping area, parking lot and clock room, has been completed.

Accompanied by Vellore Collector P. Kumaravel Pandian, Water Resources Minister Duraimurugan inspected the project site on Tuesday and suggested that the floor of the new terminus be raised by at least two feet from the road level to prevent flooding during heavy rains as witnessed in Vellore and Ranipet in recent years. “Apart from buses to Chennai and Bengaluru, the new terminus will host buses to Tiruvannamalai, Arani, Kancheepuram and Chittoor,” P. Ashok Kumar, Commissioner of Vellore City Corporation, said.

Located between the Bengaluru Highway and the Palar, the new terminus is spread over 8.89 acres of land connecting Vellore’s Old Town areas like Officers’ Lane and CMC with developing areas like Sathuvachari, Rangapuram, Katpadi, Kagithapattarai and Gandhi Nagar. More importantly, officials said, the new terminus would ease the pressure on the old bus stand in the heart of the town.

As per the plan, the new terminus would have bays to park 84 buses. Eleven bays are being built to park idle buses that ply mainly outstations. A parking lot that to hold 96 two-wheelers and 15 cars, besides retiring rooms and rest rooms for the crew will come up at the terminus.

The new terminus will have two restaurants, ATM kiosks, a public address system and 63 shops. Ramps for the persons with disabilities will be provided. The entire terminus will come under surveillance with a police outpost monitoring the vehicles round-the-clock. Free wi-fi connections will also be provided. Corporation officials said that 3,000 sq. ft of private land behind the terminus will be acquired by the district administration to provide one more exit for buses.