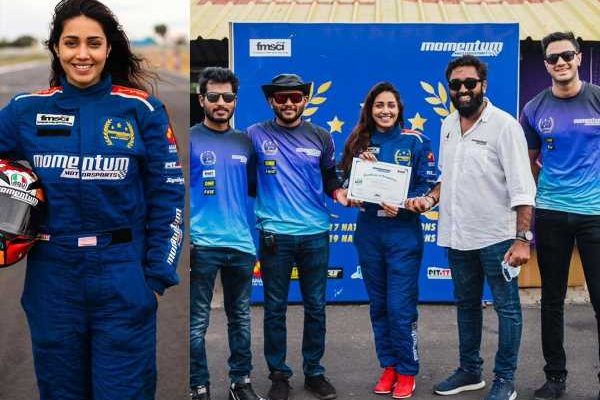 Nivetha Pethuraj is one of the popular names in South Indian film Industry.  She made her acting debut with Oru Naal Koothu, which was released in 2016.  Now according to the latest report, she has achieved a rare feat. The young actress Nivetha Pethuraj became a certified car racer.  The actress has immense passion for car racing.

Nivetha Pethuraj has completed the Level 1 of the Formula Race Car Training Program hosted by Momentum – School of Advance Racing.  This news is confirmed by Nivetha herself as she said  that her interest towards cars started during my school days when she was studying in 8th grade when an aunt in my neighbourhood purchased a sports car that inspired her with a strong curiosity towards sports cars, and it kept brewing in her for years.

According to Nivetha Pethuraj,  she purchased a Dodge Challenger sports car in 2015, and I was the second girl in UAE to get it.  Though her  father was not happy as he was concerned with the V6 Engine, which has a fast racing power.  But she was confident driving it and felt so cool.

The photographs of  Nivetha  Pethuraj donning a car racer suit is going viral on the social media. On the work front, she will be next seen playing the female lead in Vishwak Sen starrer movie Paagal.