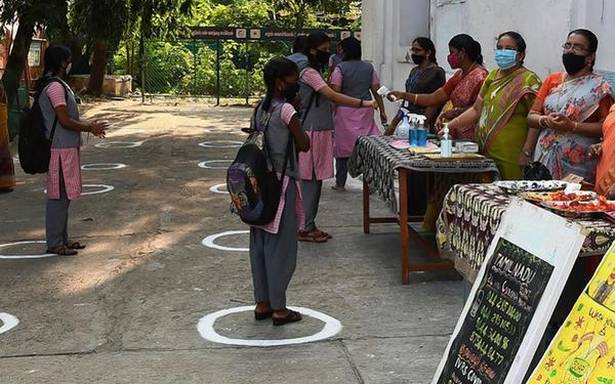 Issue will be taken up with Chief Minister, says Sengottaiyan

School Education Minister K.A. Sengottaiyan has said that no decision has been taken yet on reopening of schools for students from Classes 1 to 8.

“Given the present situation, no inspection has been conducted to reopen schools for students of Classes 1 to 8,” the Minister told mediapersons in Gobichettipalayam on Thursday.

The issue would be taken up with Chief Minister Edappadi K. Palaniswami for discussion.

He said 98.5% students from Classes 9 to 12 were attending schools with the consent of their parents.

Asked about special teachers continuing their agitation for the seventh consecutive day in Chennai, the Minister said the Central government had fixed their salaries at ₹5,500 a month in 2014, and the State government had enhanced it to ₹10,000 a month recently.

“They have to work for three-and-a-half days a week,” he said.

To a question on whether the Central government had given its nod for conducting NEET twice a year, Mr. Sengottaiyan said they were yet to receive any communication from the Centre.