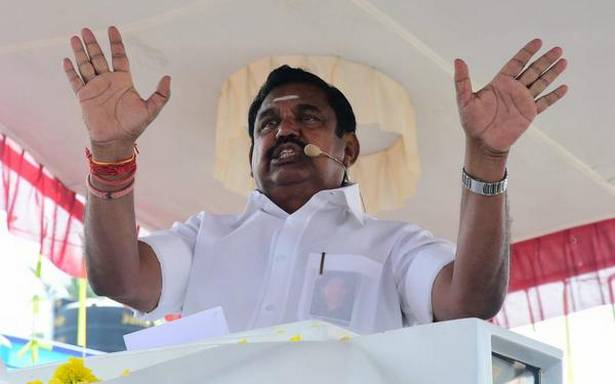 However, this relief does not apply to those involved in major offences, the CM said

Tamil Nadu Chief Minister Edappadi K. Palaniswami on Friday announced that cases, other than for major offences, registered against protesters opposing the Citizenship Amendment Act (CAA), 2019, last year would not be pursued any further. He also announced that cases registered against the general public on charges of violating the COVID-19 lockdown rules too would not be pursued.

Addressing an election campaign at Kadayanallur near Tenkasi, Mr. Palaniswami announced that except for those cases that were serious offences such as preventing police personnel from discharging their duties, other cases registered would not be pursued.

The police had registered over 10 lakh cases against the general public on charges of violating COVID-19 lockdown rules and against those who spread rumours during the pandemic.

The relief would not be applicable for cases registered on specific offences such as illegally obtaining and misusing e-passes and those involved in prevention police personnel in discharging their duties.

About 1,500 cases were registered against protesters against the CAA, 2019 on charges of being involved in protests, disturbing the general public and preventing the police personnel from discharging their duties.

“Among these cases, except for those on preventing police personnel from discharging their duties and those on specific offences, further action is being dropped, considering the welfare of the general public,” Mr. Palaniswami said.