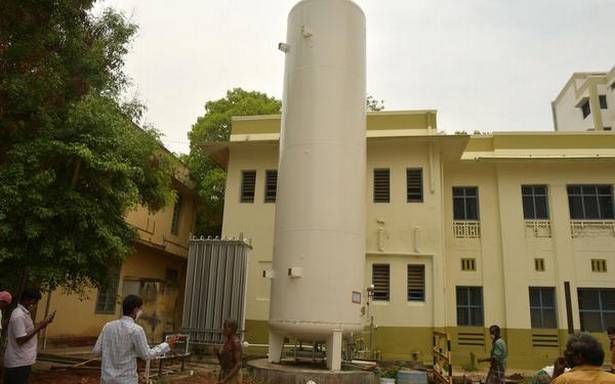 As the requirement of oxygen has gone up dramatically, Mahatma Gandhi Memorial Government Hospital has formed an exclusive team to liaise with the oxygen supplier to ensure a steady supply of oxygen.

A 10-member team formed by Dean Vanitha will work round-the-clock to check usage and monitor oxygen level. They have been asked to report to the Dean every hour about the availability of oxygen. They will coordinate with a Thanjavur-based oxygen supplier to ensure adequate supply.

“As of now there is no shortage of oxygen in any of the Government Hospitals. Sufficient supply is being maintained. However, we are closely monitoring the situation,” says Collector S. Divyadharshini. To a question, she said that a private hospital in the city, in a report, had stated that it was anticipating a shortage of oxygen. Action had been taken to ensure availability of oxygen. Hence, there was no need for concern, Ms. Divyadharshini told The Hindu.

According to the standard practice, Dr. Vanitha said that the private company would refill the oxygen plant at the hospital once in two days. Care will be taken to maintain a steady supply and the company has been asked to give priority to the hospital. The team has been entrusted with the task of ensuring uninterrupted supply of oxygen.

“There is so far no issue over oxygen availability. We hope that the COVID-19 cases will not go up further,” the Dean said.

She said that there are 350 oxygen points for COVID-19 patients. The number of COVID-19 beds had been increased to 723 from 650. All possible avenues have been explored to increase the beds. As of Saturday, 523 COVID-19 patients were being treated at the hospital, she said.

Another official said that besides the GOVID care centres functioning on the city campus of Bharathidasan University at Khajamalai and Government College of Engineering at Sethurapatti, new COVID care centres at Nehru Memorial College at Puthanampatti and Bishop Heber College in Tiruchi have started admitting patients from Saturday. A batch of six patients were admitted to Nehru Memorial College. Patients from Thuraiyur, Uppiliapuram and Mannachanallur would be admitted to the Puthanampatti centre.

An additional 6KL oxygen storage tank has been established at Pudukottai Government Medical College Hospital in addition to the existing tank of a similar capacity.

Both the tanks were being replenished every week for uninterrupted supply of oxygen to severely-affected COVID-19 patients. This apart, 359 oxygen cylinders were also available in government hospitals in the district, Collector P. Uma Maheswari said after inspecting the oxygen storage facilities and supply system at the Government Medical College Hospital here on Saturday.

There were 512-oxygenated beds at Government Medical College Hospital, government hospitals, primary health centres and private hospitals in the district, she said.

A COVID care centre with 100 beds has been created at Pudukottai Backward Classes Welfare Students Hospital. A Siddha care centre would start functioning at the Government Arts College for Women after the counting of votes on May 2. Steps were being taken to establish COVID care centres at Aranthangi ITI and STAMIN campus at Kudimiyanmalai, she added.

About 2,000 RT-PCR tests were being conducted every day in the district and those with symptoms should immediately undergo the test, she said pointing out that the district was reporting daily COVID 19 cases in three digits now. She also urged the public to get themselves vaccinated without hesitation. A 24-hour control room was functioning in the district to provide information, counselling and organise ambulances for positive persons. It can be accessed by dialling 04322 222207, she added.