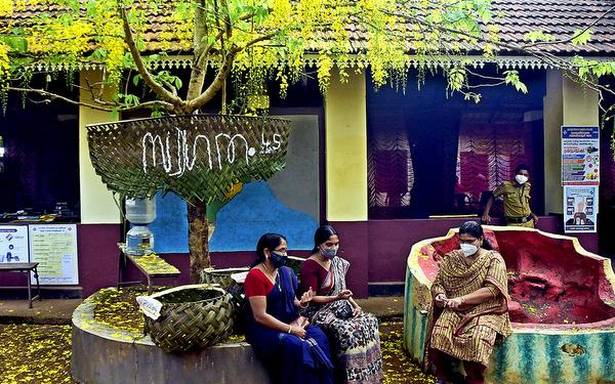 Despite the best efforts on their part, officials of Suchitwa Mission and Haritha Keralam Mission in the district are not entirely satisfied with the implementation of green protocol during the Assembly polls.

The two Missions had put their heads together to ensure that the election did not result in a heap of waste. Several awareness programmes were held for the purpose, especially for polling officers, resource persons, candidates as well as political party leaders. However, a lapse on the part of the government machinery against the backdrop of the COVID-19 pandemic defeated the purpose to an extent, said M. Mini, District Coordinator of Suchitwa Mission.

Owing to the pandemic, the Health Department had warned against use of steel cups for water and tea distribution in booths, and ground-level workers had to use disposable paper cups. The food distributed among polling officials was packed in plastic covers, which added to the pile of disposables. “While trying to prevent the spread of COVID, we were creating more non-biodegradable waste,” she said, adding that the Health Department and the district administration should discuss and come up with a solution to the issue. “Reuse is one of the basic tenets of green protocol. Using anything that is not reusable is a violation of the code,” Ms. Mini added.

On the other hand, the two Missions had coordinated well to manage Green Booths and disposal of waste. The Haritha Keralam Mission had deployed Harithakarma Sena members across the district to collect waste, especially at Green Booths. They were coordinated through a mobile application developed by the Suchitwa Mission.

“Though there was only one Green Booth in a local body, some local bodies took an extra effort to make sure that all of their booths were Green Booths. A few NGOs also joined hands to manage such booths,” said P. Prakashan, District Coordinator of Haritha Keralam Mission. The Missions had coordinated with IMAGE (Indian Medical Association Goes Eco-friendly) to dispose of biomedical waste such as PPE kits, gloves and discarded masks.

While Ms. Mini lamented the lack of awareness among common people, Mr. Prakashan said that there were some improvements. “I found some polling officials washing and drying plastic covers in which they got their food. It shows they have some sense of the danger those objects pose,” he said. “However, the controversy over the ‘Green’ of ‘Green Booths’ that gave it a political colour was senseless,” he added.