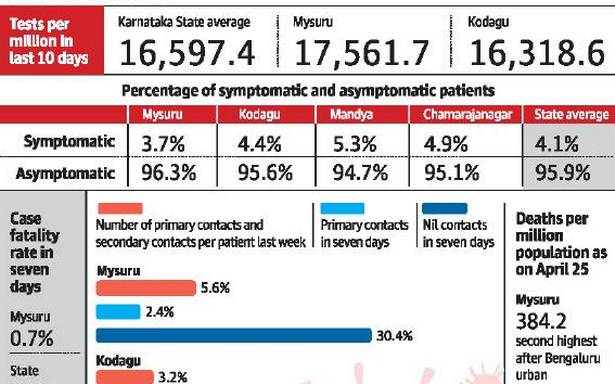 In the previous week, Mysuru had 96.3 per cent asymptomatic patients

A majority of patients testing positive for COVID-19 in Mysuru are asymptomatic. This has been analysed by the State’s COVID-19 War Room which says that 96.3 per cent of patients had no symptoms yet they tested positive to the infection.

The percentage of symptomatic patients in Mysuru in the previous week was 3.7 per cent.

If the figures on the total number of positive cases reported last week are analysed, the positivity rate in Mysuru rose increasingly since April 1 and peaked after April 13, putting the district administration on its toes for bringing down the rapidly spreading infection.

Between April 19 and 25, Mysuru reported 4,373 cases which is the fifth highest after Bengaluru city, Tumakuru, Kalaburagi and Ballari. In the last two weeks, more than 8,000 cases were detected in Mysuru, mounting pressure on the already-stressed healthcare system here.

The neighbouring districts are also reporting high positivity rate. Cases are seeing a spike in Mandya, Kodagu and Chamarajanagar since the last two weeks. Mandya’s positivity is higher than Mysuru at 12.4 per cent. Chamarajnagar showed 13.6 per cent of positivity rate.

The number of persons in active quarantine has also gone up in Mysuru with about 14,219 persons in isolation which is the fourth highest after Bengaluru, Tumakuru, Ballari and Dharwad.