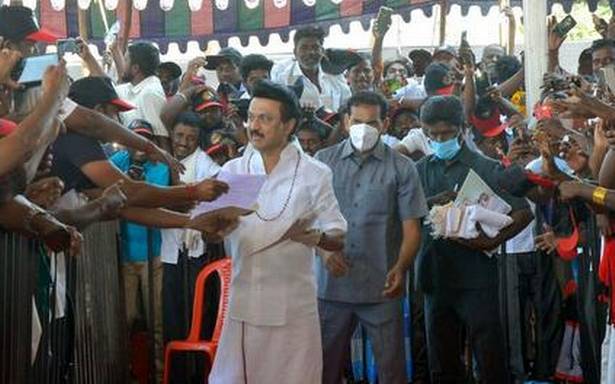 DMK president M.K. Stalin on Saturday said that time was fast approaching for the AIADMK government to suffer a serious debacle in the forthcoming Assembly polls, since the people are totally disenchanted with the present administration.

Speaking at ‘Ungal Thogudhiyil Stalin’ (Stalin in your constituency), a poll outreach programme at Virudhachalam assembly constituency in Cuddalore district, he said that the AIADMK regime had let down the people without taking care of them during the pandemic.

Mr. Stalin said that it was really amusing that the government was advertising claiming that it was standing tall against the backdrop of the State having witnessed 8 lakh cases of COVID-19 positive cases and around 12,000 succumbing to the infection. According to him, in reality only Chief Minister Edappadi K. Palaniswami and his Cabinet colleagues were standing tall due to their questionable practices, and not the people. One cannot become a leader by merely advertising, he said.

Referring to the Chief Minister’s criticism against him that he (Stalin) did not know about hard work, the DMK leader said that he did not understand what Mr. Palaniswami meant by hard work. “Hard work does not mean crawling before a person and toppling them for political gains to enjoy the seat of power,” he said. “My father Kalaignar (M. Karunanidhi) had taught me that the virtues of hard work lay in extending help to the people. But Mr. Palaniswami’s understanding of hard work is quite amusing,” he said.

Mr. Stalin said that he always remained with the people and personally went and met them during the Thoothukudi firing, anti-NEET protests, hike in power tariff and the farm laws.

“I wanted ₹5,000 per month to be disbursed to the people affected due to the pandemic. The Chief Minister claimed that money was a hurdle, but the government had been releasing hefty payments to contractors,” he said. “The government had resorted to alleged malpractices in the finalisation of tenders right from the procurement of bleaching powder to purchase of medicines,” he charged. “The administration indulged in irregularities even in the supply of food to people affected by the pandemic,” he alleged adding that “the time has come to jettison this government.”