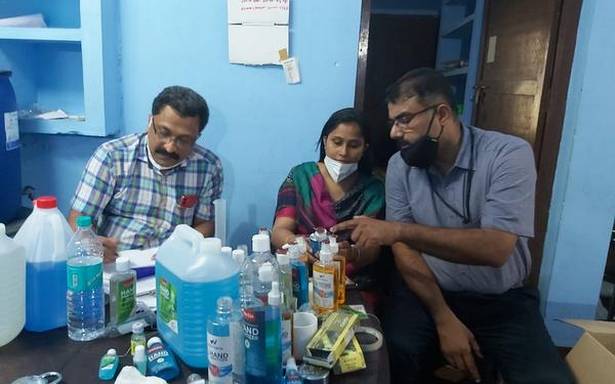 The Intelligence wing of the Drugs Control Department seized around 2,500 litres of fake sanitisers from a house near the Nedumbassery airport on Thursday.

The illegal products were manufactured and labelled at the house located in a residential area at Kottayi. Officials found that the sanitisers had been given various brand names and sold to retailers and other customers without bills or receipts.

“We are in search of one Hashim, staying near Union Christian College at Aluva, who is suspected to be the key person behind the illegal activity. He had taken the house on rent. His mobile phone remains switched off, and he is learnt to be in Mumbai,” said Jayan Philip, Drugs Inspector (Intelligence), Ernakulam. A case under the provisions of the Drugs and Cosmetics Act was registered against him.

The house was sealed, as the team found that the accused had set up equipment for labelling and manufacturing fake sanitisers.

The clandestine operation was busted by the Intelligence wing after officials, who had posed as customers, made a call to the contact number of the illegal firm. A woman who picked up the call directed them to a person employed at the house. “He came in an autorickshaw to deliver our requirement. They were found selling five litres of fake sanitisers at ₹500. Regular customers, mostly retailers, were given the fake product at lower prices, and they promoted the products over the counter,” said Mr. Philip.

Local residents informed officials that they had also purchased the product on several occasions without realising that it was fake. The accused had taken care not to invite customers to the house by always delivering the products at shops.