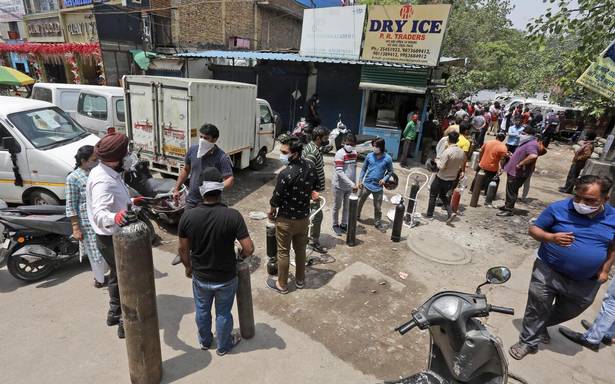 As many as 20 critically-ill COVID-19 patients died at Jaipur Golden Hospital in the national capital on Friday night due to low stock of oxygen. The hospital on Saturday morning also have oxygen for only 45 minutes and they sought for urgent government help.

The city has been grappling with shortage in oxygen supply for the past seven days amid a huge surge in coronavirus cases.

"20 critically ill COVID patients died last night over oxygen crisis. The oxygen stock was never completely dry, but the pressure was low as we were running out of stock," Dr. D.K. Baluja, Medical Director of Jaipur Golden Hospital in Delhi told The Hindu.

Dr. Baluja said that the hospital has over 210 patients and they only have oxygen stock to last for 45 minutes at 10:15 am on Saturday.

"We were supposed to get a supply of 3,600 litres of oxygen at 5 pm on Friday, but we got 1,500 litres at 12 pm. There was a 7-hour delay and by that time the pressure of oxygen supply was low. Even while refilling, it takes time for the pressure to build up," he said.

Oxygen stock of Batra Hospital in Delhi was almost zero around 8:30 am on Saturday, the hospital said adding that around 9:30 am, they received oxygen through the Delhi government.

"The oxygen was almost zero and we diverted oxygen from everywhere else to the ICU. We have 265 COVID patients," said Dr. Sudhanshu Bankata, Executive Director of the hospital, when asked how the hospital managed the situation.

Delhi government has been blaming Haryana and Uttar Pradesh governments for not allowing smooth supply of oxygen from private oxygen plants in the States to Delhi. Ideally there should be a buffer stock of oxygen for at least 48 hours in hospitals, according to doctors.

But since the record surge in COVID-19 cases in the city, hospitals have been working with lesser stock and they are refilling almost on a daily basis.

Most hospitals are operating with oxygen stock which would last only for 12-18 hours, officials said.