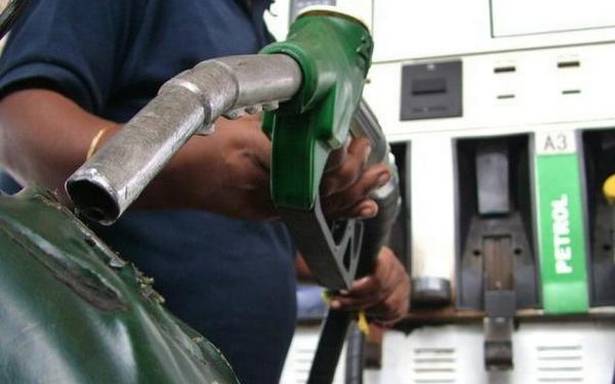 Rates are at the highest in the country in Sri Ganganagar district of Rajasthan where petrol comes for ₹105.52 a litre and diesel for ₹98.32 per litre

Petrol and diesel prices on June 1 scaled new highs across the country after they were hiked for the 17th time in a month.

Petrol price was increased by 26 paise per litre and diesel by 23 paise a litre, according to a price notification of State-owned fuel retailers.

Fuel prices differ from State to State depending on the incidence of local taxes such as VAT and freight charges. Rajasthan levies the highest value-added tax (VAT) on petrol in the country, followed by Madhya Pradesh and Maharashtra.

The price of petrol, which had already crossed the ₹100-mark in several cities in Rajasthan, Madhya Pradesh and Maharashtra, breached the psychological barrier in Mumbai on Saturday. Tuesday’s price increase was the second since then.

The increase on June 1 is the 17th increase in prices since May 4, when State-owned oil firms ended an 18-day hiatus in rate revision they observed during Assembly elections in States like West Bengal.

Oil companies revise rates of petrol and diesel daily based on the average price of benchmark fuel in the international market in the preceding 15-days, and foreign exchange rates.

Brent crude oil — the most widely used international benchmark — has risen 36% this year to more than $70 a barrel.

This has prompted an increase in retail fuel prices.

Rates are at the highest in the country in Sri Ganganagar district of Rajasthan where petrol comes for ₹105.52 a litre and diesel for ₹98.32 per litre.