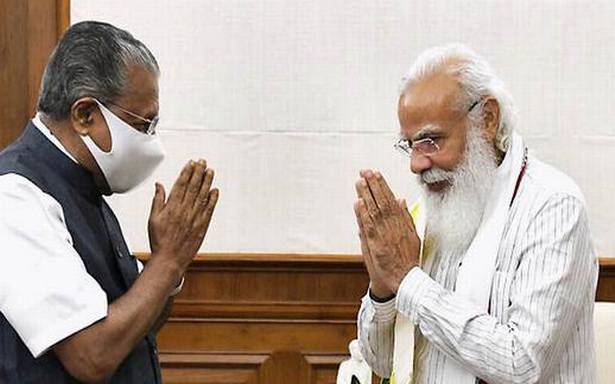 ‘Ideally, the States should be given financial aid’

Mr. Vijayan said the COVID-19 pandemic had put a strain on the State’s finances. “Ideally, the States should be given financial assistance. But the Centre, in fact, owes the State ₹4,524 crore of GST compensation for 2020-21. This should be disbursed at the earliest,” Mr. Vijayan said at a press conference.

The meeting with the Mr. Modi lasted nearly half an hour and Mr. Vijayan described it as cordial. Long-standing problems and demands of Kerala were discussed, he stated.

The need of the hour was to ensure that the majority of the people were vaccinated. “Which is why Kerala too needs more vaccines and we informed this to the Prime Minister. We need 60 lakh doses for this month,” he said.

To administer the second dose alone, the State needed 25 lakh doses this month. Kerala so far had managed to give the first dose to 44% of people above the age of 18.

When asked if he discussed the rising fuel prices with him, Mr. Vijayan said this issue did not impact Kerala alone. “This is something that impacts the entire country and our party will be raising it emphatically during the Parliament session,” he asserted.

Mr. Vijayan said his government had not yet formed an opinion on whether or not fuel should be brought within the GST ambit.

In his three meetings on Tuesday, Mr. Vijayan flagged the delays in many infrastructure projects in the State, including the Sabari-Angamaly rail line, an airport for quick access to pilgrimage site Sabarimala and an AIIMs for the State.