PM Modi address to nation highlights: Prime Minister Modi asks people to exercise caution during Diwali and other upcoming festivals, says masks have to become a part of life till the pandemic is over 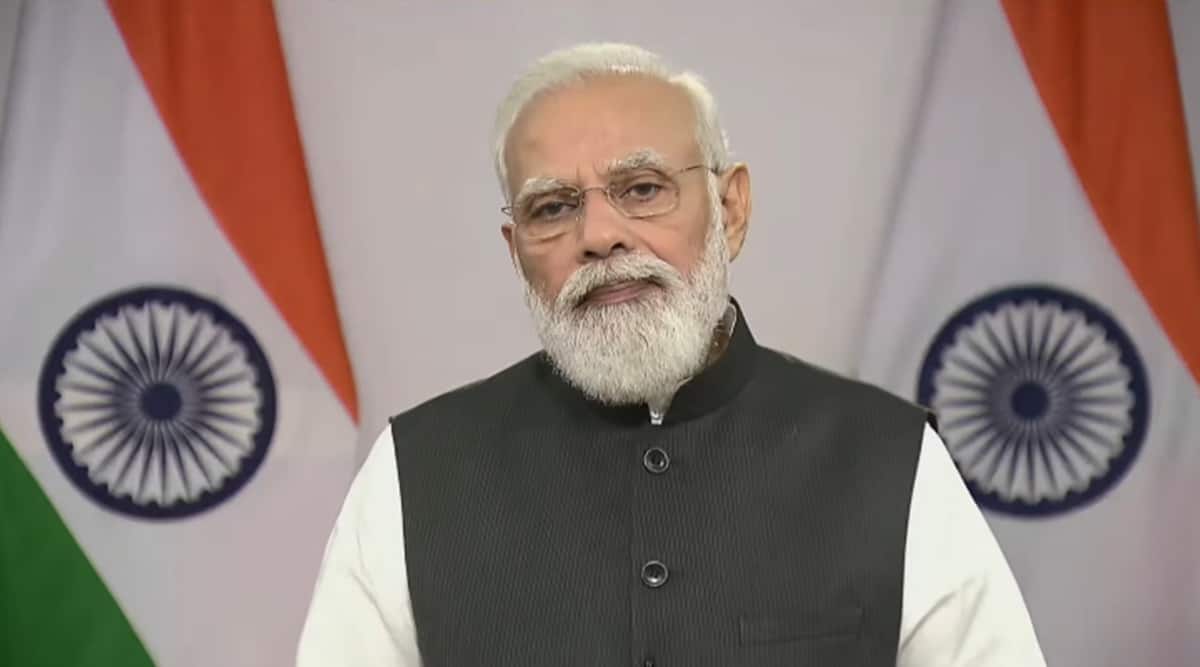 Narendra Modi Speech Today Update: Prime Minister Narendra Modi, while addressing the nation today after the country’s milestone of 100 crore vaccinations, said the vaccination programme was “science-born, science-driven and science-based”, and asserted that it had been ensured there was no “VIP culture” in the drive. From the development of vaccines to inoculation, science and science-based approach have been involved in all processes, he added.

“100 crore vaccines is just not a number. It is the reflection of the capacity of this country, this is a new chapter of the country, a country that knows how to achieve huge targets,” PM Modi further said.

Saying that the achievement was an answer to all those criticising India’s inoculation drive, Modi said, “Everyone is comparing India to other countries but remember India’s starting point was different. The other countries have always participated in medicine and vaccination for a long time and everyone questioned whether India will be able to do the needful. 100 crore jabs is the answer to all the questions.”

This was Prime Minister Narendra Modi’s tenth address to the nation since March 2020. The first was on March 19, 2020, in which PM Modi had announced the Janta Curfew amid surging Covid-19 cases. Earlier in the day, describing India’s vaccination drive as a journey from “anxiety to assurance” that has made the the country emerge stronger, Prime Minister Narendra Modi wrote: “The journey from anxiety to assurance has happened and our nation has emerged stronger, thanks to the world’s largest vaccination drive. It has been a truly bhagirath effort involving multiple sections of society.”

Observing that India has achieved a “difficult but extraordinary” target of 100 crore Covid vaccine doses, Prime Minister Narendra Modi on Friday cautioned people to remain vigilant and not become careless, and urged them to continue wearing masks, saying that weapons are not thrown away while the battle is on.

Addressing the nation, the Prime Minister said, “Yesterday, on October 21, India has achieved the difficult but extraordinary target of 1 billion – 100 crore – vaccine doses. Behind this achievement is the power (kartavyashakti) of 130 crore countrymen; so this success is the success of India, the success of every countryman.” Read our full report

Prime Minister Narendra Modi, during his address to the nation on Friday, said people cannot let their guards down during Diwali or the upcoming festivals, even as he praised everyone in helping India go past the 100 crore vaccination milestone.

He congratulated every citizen as the country and said that this achievement was not merely a number, but rather marked “the beginning of a new chapter in the history of the country”. Crossing this significant threshold would act as an answer to all of those criticising India’s inoculation drive, PM Modi said during his 10 am address. Read More

Prime Minister Narendra Modi on Friday congratulated the nation on completing the landmark 100-crore cumulative Covid-19 vaccination, calling it a clear answer to all those who doubted how India would handle the pandemic. He sent his good wishes for the upcoming festivals, but warned the citizens against lowering the guard against the coronavirus. The process is a live example of India’s ‘Sabka Saath, Sabka Vikas’ policy, he said during his address to the nation at 10 am. Read More

Prime Minister Narendra Modi addressed the nation on Friday following India achieving the milestone of having administered over 100 crore Covid-19 vaccine doses. In case you missed it, you can watch it here:

I urge all the citizens to make “Made in India” and “Vocal for local” as much of a movement as ‘swachch abhiyaan’. This Diwali, unlike the last one, we have a sense of belief and confidence: PM Modi

PM Narendra Modi insisted everyone to continue to wear masks and follow all Covid-19 protocols even though the country has vaccinated over 100 crore people. He also urged those who are yet to take the vaccine to get their jabs at the earliest.

The Prime Minister said experts in India and abroad are very positive about India’s economy. “Today, not only record investment is coming to Indian companies but new employment opportunities are also being created for the youth,” he added.

Last year, a lot of traders had suffered huge losses as sales during Diwali had dipped significantly owing to the Covid-19 virus. However, this year, thanks to 100 crore people being vaccinated, people are feeling much safer and our traders can do business like usual, the Prime Minister said.

PM Narendra Modi says, “World nations are still battling vaccine hesitancy while similar concerns were raised in India. But the 100 crore vaccine dose achievement shows how we have defeated the vaccine hesitancy. With the trust in science and innovations, India has managed to achieve this major feat.”

Prime Minister Narendra Modi hails India’s vaccination drive. “While many countries are struggling with vaccine hesitancy issue, People’s participation has become the weapon against the pandemic for Indians. For us, democracy means Sabka Saath… everyone was taken along. If the virus does not have discrimination, vaccination also shouldn’t. So, there was no VIP culture allowed in vaccination.”

PM Narendra Modi says, “Some concerns were also raised about the stringent Covid-19 restrictions. Many said that how can such strict restrictions be imposed in India. But we are a democracy, we have considered the needs of all, following our sabka saath, sabka vikaas principle.”

There was a lot of pressure from different interest groups to give preferential treatment to them in vaccination. But the government ensured that, like our other schemes, there is no VIP culture in the vaccination drive.

PM Narendra Modi says the 100 crore vaccine dose achievement belongs to all 130 crore Indians. PM Modi congratulates all Indians for the major milestone achieved on Thursday. “This is not just a number, it is a beginning of a new chapter, a new India,” said PM Modi.

Prime Minister Modi starts his address to the nation, speaks on India’s 100-crore-jabs milestone. The PM praised the country for getting together to reach this landmark.

This will be Prime Minister Narendra Modi’s tenth address to the nation since March 2020. The first was on March 19, 2020, in which PM Modi had announced the Janta Curfew amid surging Covid-19 cases.

Viewers can watch the live telecast of PM Modi’s speech on PMO’s YouTube channel and the Twitter handle. Read More

Prime Minister Narendra Modi on Friday changed his profile picture on Twitter to mark the milestone of India administering over 100 crore Covid-19 vaccine doses. His new display image features a vial of the coronavirus vaccine, with the message ‘congratulations India’ plastered across it. “India scripts history. We are witnessing the triumph of Indian science, enterprise and collective spirit of 130 crore Indians,” the Prime Minister tweeted on Thursday, soon after the country’s vaccination drive crossed the 100-crore mark. Read More

Ten months after the first phase of the Covid-19 vaccination drive began, India hit the landmark 100-crore jabs on Thursday. As the country celebrates the milestone, The Indian Express takes a look at some of the healthcare workers who overcame struggles and vaccine hesitancy to make it possible. Read More

SpiceJet’s special aircraft livery was unveiled in New Delhi to celebrate the achievement of India having administered over 100 crore Covid-19 vaccines. (Express Photo by Praveen Khanna)

Challenge ahead: How to boost coverage of second dose

While India reaching the landmark of 100 crore vaccine doses is a significant public health effort, it’s now crucial that the country sustain the momentum that is needed to administer approximately 88 crore additional doses to fully vaccinate the adult population.

India administered an average of 59.29 lakh daily doses in August, which went up to 78.69 lakh doses in September. However, so far in October, in the first 20 days of the month, the average daily vaccinations have fallen to 46.68 lakh doses. The biggest challenge for states will be to step up the second dose coverage.

100 crore vaccines: A reason for cheer, and the need to keep going

Unlike a few previous instances when record-breaking vaccinations were carried out to mark a special occasion, the milestone of 100-crore doses was crossed on a comparatively uneventful day. By the end of the day on Thursday, fewer than 80 lakh doses were administered. There have been about 20 occasions when at least this number of vaccines have been administered in a single day. But that takes nothing away from the enormity of the achievement. This is the fastest rate of vaccination, not just in India, but possibly anywhere in the world.

However, while a celebration is not uncalled for, it is important to realise that this is just a milestone, even though an important one, and not the destination.