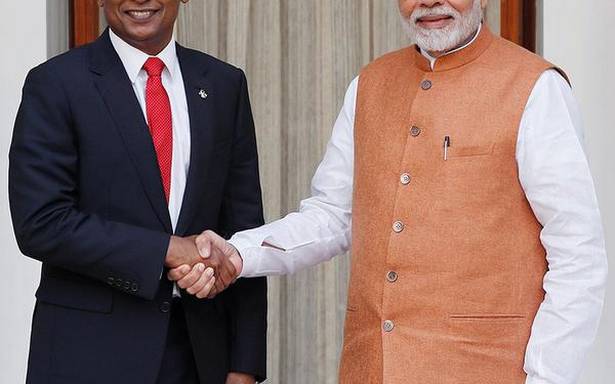 Mr. Modi called the Indian Ocean island nation the “central pillar” of India’s ‘neighbourhood policy’, and maritime vision of Security and Growth for All in the Region or ‘SAGAR’, the statement said.

The call between the leaders assumes significance at a time when sections within the Maldives have mounted an ‘#Indiaout’ campaign online, criticising India’s engagement with the Solih administration.

It also comes amid reported tensions within the ruling Maldivian Democratic Party (MDP), with Parliamentary Speaker and former President Mohamed Nasheed, according to Male-based media, telling party colleagues recently that he cannot align himself to President Solih anymore due to “ideological differences”.

Mr. Nasheed – currently undergoing treatment in the United Kingdom after surviving an attempt at his life – was not reachable for comment. The MDP has not commented on the development.

“President Solih thanked Prime Minister Modi for the India’s cooperation and support in the fight against the Covid pandemic,” the MEA statement said. India has provided a total three lakh doses – two lakhs as a gift and one lakh for commercial procurement — of COVID-19 vaccines to the Maldives.

“Both leaders reviewed the progress of the India-supported development projects in the Maldives and expressed satisfaction at the rapid pace of implementation despite the constraints of the COVID pandemic,” the statement said. It made no mention of the proposed consulate in the Maldives’s Addu atoll, which the Indian cabinet cleared, setting off a controversy in the island nation. India sceptics termed the move “heavy-handed”, in the absence of any official statement on it from Maldivian authorities.

Mr. Modi also conveyed his congratulations to President Solih on the election of Maldivian Foreign Minister Abdulla Shahid as the President of the UN General Assembly, the press release said.