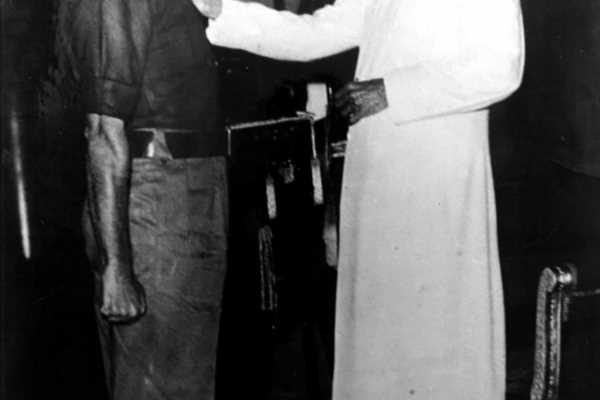 ‘Anglo-Indians have played a significant role at the forefront, meeting every challenge to the security of the motherland.’
A fascinating excerpt from Barry O’Brien’s The Anglo-Indians: A Portrait of a Community. In the first Kashmir campaign (1947-1948) against Pakistan, half the pilots decorated for gallantry were Anglo-Indians.

It was these pilots, flying at treetop heights, who stopped the insurgents in the valley when they were literally knocking at the gates of Srinagar.

Michael Blake was the first Anglo-Indian to be decorated with the Vir Chakra, followed by Anthony Suares.

Says Colonel (retd) Jude Rocque, who served with 15 Grenadiers for 35 years and received a Sena Medal in 1994 for gallantry while posted in Jammu and Kashmir, ‘Since that first threat to India’s freedom, Anglo-Indians have played a significant role at the forefront, meeting every challenge to the security of the motherland.’

The Sino-Indian War of 1962 was one such time. Tom Anderson, Johnny Greene, and Sherwin Tully were some of this war’s frontline heroes. In the 1965 War, the Indian Air Force faced huge psychological odds — of a Pakistani air force equipped with the far superior American F-104 star fighters and F-86 Sabre jets, against which we had no aircraft of comparable sophistication.

But the IAF was the first to draw blood when, on 3 September, Squadron Leader Trevor Keelor, with cavalier disdain for the odds, gunned his Indian-made Gnat at a Sabre and shot it down.

Cooke is the only IAF pilot who successfully engaged multiple enemy aircraft during air combat.

Less than a fortnight later, Trevor’s brother Denzil shot down a third Sabre and the myth of the American aircraft’s superiority was quickly shot out of the sky by the young IAF pilots who outmanoeuvred the PAF. Each of them received the Vir Chakra. In the Bangladesh Liberation War with Pakistan in 1971, Anglo-Indians in the IAF were again flying high.

In the same breath as the IAF are mentioned the names of Indian Army officers who served gallantly on the ground.

Remembered for his exploits in the 1965 War is Maha Vir Chakra recipient Desmond Hayde, commanding officer of the 3 Battalion of the Jat Regiment, who led his troops in the Battle of Dograi — many in the army believe he deserved the Param Vir Chakra.

There were other heroes too, like James Fridell, who saw action as a brigadier in Rajouri in 1965 against Pakistan; Brigadier Ronald O’Connor, whose memorable contribution was the improvements he brought about in training and administration when he was deputy commandant of the Infantry School; and Captain Eric Tucker, who died a gruesome death in 1957 in the Naga Hills, at the hands of insurgents.

He received the Ashok Chakra Class 1 posthumously. In times of war, Tucker would have won the Param Vir Chakra. In 1962, Thomas Henderson-Brooks became first Anglo-Indian to be made lieutenant general in independent India.

Another hero who retired as a lieutenant general was Patrick Dunn. He took over the operational command of I-Corps in Kutch during the 1965 war at very short notice, and his corps had the measure of the enemy.

The Indian Navy, too, has been served by outstanding Anglo-Indian officers.

When it took part in the 1971 operations for the first time on a large scale, with impressive results, many Anglo-Indian officers were decorated, including Vivian Barboza, Melville Schunker, Francis Fraser, Patrick Barron, George Martis and Garnet Shea.

The first Anglo-Indian to head the Indian Navy was Admiral Ronald Pereira who served as the tenth chief of naval staff, from 1979 to 1982, and is widely regarded as the prime architect of the navy in modern India.

To Commander Colin McGready goes the credit of pioneering major developments in the Indian Navy when he was at the helm of the Indian Naval Academy. While counselling young Anglo-Indians today, besides the legends of the past, the shining examples of officers who have made it to the top in recent decades are highlighted.

Then there is the highly decorated Air Marshal Keith Lewis who retired in 1993 after 37 years of outstanding service, 27 of them in the field, and Rear Admiral Alan O’Leary who stepped up to fight for the pension for armed forces personnel.

Even more recently, the community was proud to have Air Chief Marshal Norman Browne as the 23rd Chief of Air Staff and the Chairman of the Chiefs of Staff Committee.

In keeping with the trend since Independence, Anglo-Indians still prefer the air force and there are officers across the country from squadron leaders to group captains.

However, the number of Anglo-Indians in the armed forces today has reduced considerably to a trickle.

But the few who are taking the plunge are doing the community proud, like Major Lionel Wilkins of 63 Cavalry who has been in command of tanks at snow-capped altitudes of 15,000 feet, and Elvis Rodrigues.

Every Anglo-Indian heart was bursting with pride on 26 January 2019.

‘The Sukhois zoomed over Rajpath in New Delhi, leaving behind streams of exhaust that spread into a trident as the planes diverged expertly,’ wrote India Today‘s Shiv Aroor in a brief tribute which had a fun title — ‘Republic Day: Elvis Leaves the Building in a Sukhoi’.

He explained: ‘The man who flew the lead Su-30 MKI in the breath-taking Trishul formation was named after Elvis Presley — Group Captain Elvis Clinton Rodrigues!’

The same goosebumps had been felt when Pride of the Community recipient Michael Robertson wrote on Facebook about how he watched with ‘glowing pride as my young son-in-law, then a captain of the Indian Army’s 61st Cavalry, led the Republic Day Parade at Delhi on horseback,’ in 2012.

The young captain, a champion at many an equestrian event over the years, is today Major Danni Swittens and is posted at the Military Academy in Dehradun. Independence Day in 2018 was another red-letter day for the community.

It was the day when a young fighter pilot, Vernon Keane, received the VSM (Gallantry) — a medal very few receive every year, unlike the VSM (Devotion to Duty), which is awarded to several.

Working alongside Air Marshal Denzil Keelor for the community, one of the country’s most decorated officers, I have learnt that when in the hot seat, time is of essence.

When I asked him how he never hesitates to take prompt decisions, he said to me: ‘In war, there are no emotions or romance — if you don’t get him, he’ll get you!’

Another soldier-adage of his that has stayed with me is: ‘You have to trust your partner and he has to trust you. Total trust. You must have his back and he must have yours.’

Playing tennis alongside Air Marshal Michael McMahon, a war veteran several times over, I learnt the importance of giving your best for what is in your control — be it on the tennis court or while leading one of the first Jaguar aircraft into your country. What others do is never in your control.

The Statesman reported in 2004, that unlike scores of ministers and parliamentarians who take months and years to ‘give up’ their official bungalows in Delhi, the vice chief of the air staff, Michael McMahon, had moved all his belongings out of his bungalow the night before he was scheduled to retire (after an outstanding career of forty-one years), handed over the keys on the very day he retired, before catching a flight out to Bangalore to a life of anonymity that very evening.

From Major General Robert Williams, many people learnt how to carry achievements and greatness with modesty and humility. He related war tales as if they were fun outings and nothing to crow about.

From Lieutenant Colonel Charles Wright so many of us learnt to listen intently, jot down things (on the palm of a hand if you can’t find a piece of paper, since those were pre-smartphone days), use one’s intellect to analyse and question, even if your best friend is in the chair, and after serving your country, do something for your community, like travel in an unreserved compartment for a couple of days to attend an annual general meeting — even when you’re well into your eighties!

This edited excerpt from The Anglo-Indians: A Portrait of a Community by Barry O’Brien has been used with the kind permission of the publishers, Aleph Book Company.