Restaurateur AD Singh, who runs the Olive Group of eateries, admits that he does not belong to a generation that identifies with the Metaverse — a virtual world where people live, work and play through their avatars.

Yet, the Olive Group became the first Indian restaurant chain to foray into the Metaverse.

As an entrepreneur, Singh says, he cannot ignore the fact that this alternative universe is becoming increasingly real to the new generation.

“With Oliverse, we are making a small splash into the Metaverse to announce our intention in the Web3 world, and we are hoping to collaborate with more partners,” he told Business Standard.

Quiz him about the non-fungible tokens (a cornerstone of the Metaverse ecosystem which allow you to own virtual goods) that the group launched recently and Singh replies excitedly: “The launch created such a social buzz for the Olive brand.

“We are already planning our next steps.

“We also want to explore how the credibility we have built can be leveraged with the Web3 community in a hybrid way.” Though Metaverse as a concept has been around for years, the Covid-19 pandemic, and the consequent dependence on everything digital, has made it look real.

While Facebook renamed itself “Meta” to underline its focus on the Metaverse, it also announced an investment of $10 billion to build the ecosystem.

Other companies are also accepting the reality of the Metaverse.

Meta’s Reality Labs, the division responsible for the Quest VR Hardware and software, brought in $695 million in revenue in Q1 of CY22, up from $534 million year-on-year.

In fact, all major tech players — Sony, Microsoft and others — have been increasing spending on VR-based headsets.

However, industry experts and players argue that like all new technologies, the Metaverse, too, is in the hype mode now, and that its true form will emerge only after a few years, once it has gone through the trial-and-error process. Many companies in India, too, are dabbling in the Metaverse.

Take Accenture, which has globally announced the creation of its own version, called the Nth floor, to onboard new hires, hold meetings, conduct training, and even socialise as teams.

The company recently concluded the India finale of the fourth edition of its Global Technology Innovation Contest (GTIC) in the Metaverse.

“While we are still in the early days of the Metaverse, it is the future, and we anticipate several industries to be early Metaverse adopters.

“We’re utilising the Metaverse to create new experiences with our clients and within our own organisation.”

Iyer explains that concluding the India finale of Accenture’s GTIC in Metaverse helped the company engage better with its distributed workforce.

“We have been receiving positive feedback from our new joiners who love the high energy and immersive nature of their onboarding sessions in the Metaverse.

“This year, approximately 150,000 new hires will go through this induction experience across the globe.”

Kalyan Kumar, CTO and head, ecosystems, HCL Technologies, believes that the concept of limitless experiences is driving the adoption of the Metaverse.

“I think the first place the Metaverse should get adopted is planet scale systems, as they address the consumer.

“Your new consumer is going to be in the Metaverse, so its adoption will go up very quickly in that world.

“It’s more related to the B2C side of the business, and enterprise use-cases will happen, too.”

HCL Technologies has created its Meta Labs, which Kumar is confident will have a good pipeline in the next two to three years. 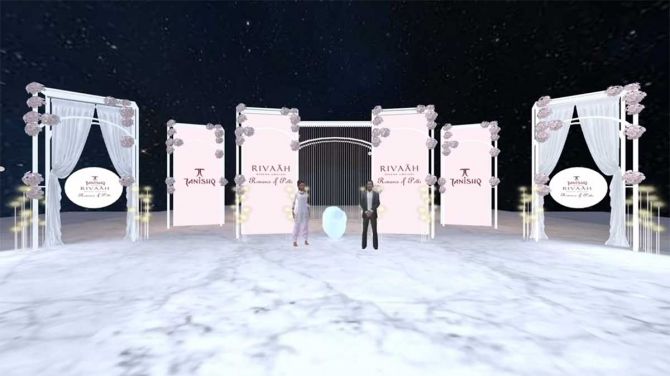 Kumar has a point when he says that the first use-cases of the Metaverse will come from B2C players.

Jewellery brand Tanishq, for example, has launched its “Romance of Polki” jewellery collection on the Metaverse.

For Tanishq, it was an opportunity to create a unique, personalised and immersive 3D virtual experience for its viewers during the launch.

“We used a webVR-based platform, as it enabled us to customise the avatars along with the display of the jewellery pieces.

“The platform could be accessed across operating systems and no login or registration was required.

“The Metaverse platform also allowed people to have video chat interactions, while moving around in the environment and trying on the jewellery on their avatars,” says Ajoy Chawla, CEO, Jewellery Division, Titan Company.

He adds that an integrated option was provided to users, so they could augment the jewellery pieces into the real world through their phone screen, giving them the feel of trying on the piece of jewellery on themselves.

However, the company has not disclosed how much it sold after the launch.

Fashion and e-commerce are the other areas where the Metaverse is likely to be adopted first.

Says Sanjeev Barnwal, co-founder and CTO, Meesho: “The Metaverse’s potential in the e-commerce industry is immense.

“It could help companies simulate the offline shopping experience more effectively by making it interactive and fun.

“Some interesting use-cases could be social shopping or shopping with friends, leading to greater customer satisfaction.” Barnwal reckons that fundamentally, the Metaverse will change how one thinks about e-commerce.

“That sounds pretty exciting to me as a technologist, because it will be a big game-changer for users as well.”

Meesho is closely watching the development and adoption of the Metaverse, Barnwal says.

“The Metaverse technology is still in its nascent stage.

“If we later feel that it will bring great value to our users, we’ll explore all possibilities and solutions to make it accessible to them.”

Caleb Franklin, CEO and founder of HeyHey, which collaborated with the Olive Group on its Metaverse journey, says that the platform is already upon us: “When you see people using filters on Snapchat using real-world AR through their mobile phones, change their face, send a funny photo to their parents — that is Metaverse.

“The Metaversal world is not far from where we actually are.”

Apart from B2C, Franklin believes Metaverse’s adoption will initially be driven by celebrities and fashion brands.

“We believe that there’s a massive Web3 adoption already underway in India.

Soon, the general population will also want to come into this, he reckons.