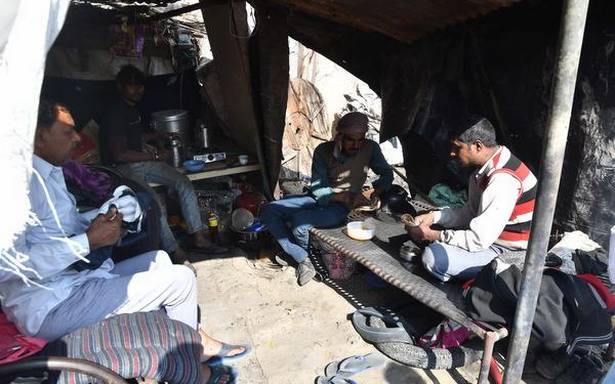 “Everything has turned into rubble; Our livelihood lost in a matter of seconds,” said 62-year-old Roop Singh as he frantically searched for whatever remained of his valuables in mounds of ash.

Mr. Singh, a ragpicker, and his 10-member family live in shanties in Neb Sarai’s Kumhad Basti in south Delhi. The discarded materials he collected each day were stored in the hut.

Last month, a blaze, which the police claimed, broke out after a few people lighted a fire to keep themselves warm, gutted around 45 huts, majority of them occupied by the ragpickers.

Nearly a month after the incident, the residents have rebuilt their houses using tin, plastic and wood, donated by NGOs, who have also provided them with blankets and clothes.

Sunita Devi, 30, said the fire broke out around 6 p.m. when she was inside her hut. “Suddenly, I heard a commotion outside as people started screaming. I took my children and fled the spot. Had it happened late in the night, we wouldn’t have survived.”

She and other slum dwellers had to spend the night in an abandoned building nearby. Many of them were barefoot and without adequate warm clothing in the cold temperature.

“Nobody cares about us, she said.

The fire call from Neb Sarai slum is one of the 92 calls that the Delhi Fire Services (DFS) has received so far this year from Jhuggi Jhopri (JJ) clusters. As many as 33 people died and 206 sustained injuries in these incidents. Officials said at least five per cent of all fire calls every year are from JJ clusters.

According to firefighters, JJ clusters are a ticking time bomb. Storage of combustible material inside the huts, hastily placed overhead wires, use of gas stoves in cramped spaces lead to these frequent blazes.

A fireman said most of the shanties in JJ clusters are built with tin and plastic sheets, polythenes and logs. “Most materials used are inflammable, besides the huts are stacked with garbage,” he said.

“It becomes difficult for firefighters in their safety gears and carrying other equipment, to navigate in these congested areas. By the time we are able to access the area by extending the hose by several metres, the fire spreads and causes enough damage to property and lives,” said a fireman, wishing to remain anonymous.

“It also becomes difficult to recover bodies due to poor visibility,” he added.

A DFS official said in most cases, the cause is found to be the local gas cylinders. “People use the small gas cylinders that are usually not ISI accredited. These leak and explode,” he said.

The official said the residents are unaware of what could trigger a fire. “Broken glass bottles are strewn around and sunlight causes eruption of minor flames in them which also break out into bigger fires,” he added.

DFS officials are briefed on rescue operations in slums and are trained to ensure minimum damage to lives and property. But their job is never easy.

In September, five people succumbed to burn injuries when a fire broke out in a slum near the Rewari line of south-west Delhi’s Mayapuri. The cause was found to be cylinder blast.

DFS chief Atul Garg claimed though hundreds of shanties are gutted annually during summers, the number of fire incidents in slums has actually come down in recent years because many slum clusters have been concretised.

Whenever fire outbreak calls are received, Mr.Garg said, depending on the enormity of the blaze adequate number of fire tenders are rushed to the spot. “It is part of our standard operating procedure,” he said.

“Handling slum fires is one of the toughest jobs of a firefighter. Reaching the spot is an uphill task due to congestion and generally there is no source of water near most slums; we are faced with lack of rescue supplies,” Mr. Garg added.

Sunil Kumar Aledia, executive director, Centre for Holistic Development, said rehabilitation of slum dwellers to resettlement colonies gets stuck because their documents perish in the fire. “This is a grey area which needs to be looked into by land agencies because such localities are disaster-prone. The victims are offered meagre compensation and left to fend for themselves,” he said.

The State government, through the District Magistrate’s office, provides a compensation of ₹25,000 to families of victims of slum fires, for rebuilding their houses.