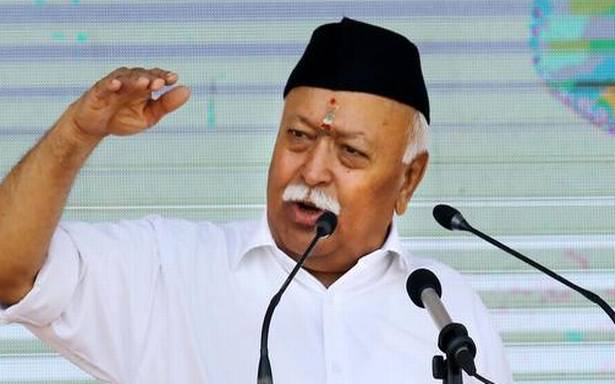 Rashtriya Swyamsevak Sangh (RSS) chief Mohan Bhagwat’s outreach to Muslims during a book launch function in Ghaziabad on Sunday evoked mixed response from Muslim academics and activists. While some found it unprecedented, others termed it an old book in a new cover. However, most of them saw it as an attempt to reshape the RSS’s image according to changing global politics.

“The fact that he accepted that lynching is an Indian reality and that Muslims are at its receiving end is something new,” said Mirza Asmer Baig, professor of political science at Aligarh Muslim University. “Some time back, he said lynching was a foreign concept, alien to India,” he added.

Prof. Baig also pointed to Mr. Bhagwat’s acknowledgement of the need to appreciate the differences in worship and lifestyle of different communities. “Acknowledging the differences is the first step towards accepting the multiculturalism that has defined Indian society for centuries. However, it is like stating the obvious. It is the RSS and its allies that were not accepting this idea of India,” he said.

He said more than Muslims, Mr Bhagat seemed to be addressing the moderate/liberal Hindu voter who was shifting away from the BJP because of its relentless pursuit of hate politics. “Also, the global realpolitik has changed after the Democrats came to power in the U.S. and the Taliban got into ascendency in Afghanistan,” he said.

On author Khwaja Ifetakhar Ahmad and Mr Bhagwat’s suggestion that Indian Muslim support to Khilafat Movement led to the rise of Hindutva and ultimately led to Partition, Prof. Baig said it was oversimplitifcation of history.

However, Mohammad Sajjad, professor of history at AMU said it was the view of some writers. Citing prominent author Intezar Hussain who migrated to Pakistan after Partition, Prof Sajjad said in one of his works, he noted that Lala Lajpat Rai said that Hindus felt threatened by the whole-hearted support of Muslims to the Khilafat Movement. “However, the word Hindutva was already coined and use of communalism for political benefit was done by Colonial rulers much before the Movement,” he said.

Reminding that RSS leaders often spoke with a forked tongue, Prof. Sajjad underlined that Mr Bhagwat’s remarks will remain mere rhetoric unless the impact is seen on the ground.

“The common Muslim is concerned about his security. Will he impress upon the government to release those Muslims who have been put into jail for North East Delhi riots on flimsy grounds? Will he ask the government to take action against the erring police officers? Will he tell the government to pay substantial compensation to the family of the victim of lynching,” he asked.

Requesting anonymity, a senior faculty from Darul Uloom, Deoband, said, except for the call for starting negotiation between the two communities, there was nothing new in what Mr .Bhagwat said.

“RSS has been reiterating that all Indians have the same DNA. It is their way to call everybody a Hindu. I want to know if they believe that the DNA of the Aryans and the Dravidians is the same,” he said.

On the negotiation part, he said Darul Uloom would soon come up with a response. “However, I must say, the first step towards dialogue was taken by our principal Maulana Arshad Madani in 2019 when he met Mr Bhagwat. It was a great risk because some sections of the community were not in favour of it. For how long you would fight; the global scenario is such that you have to sit across the table and talk.”

Md. Zaheeruddin, an senior social activist from Dasna in Ghaziabad, where a Muslim boy was allegedly beaten up for drinking water in a temple premises, said the speech has come as a relief in the tense environment.

“Conversion has been and will remain an issue. I have no qualms in admitting that we were Brahmins three generations back. We have to get over it. If our DNA is the same, how does it matter? Every year hundreds of people convert to Islam and several Muslims become Hindus. Many of them because of love. Will Mr Bhagwat make the controversial temple priest understand that it is not ‘love jihad’.” he said.