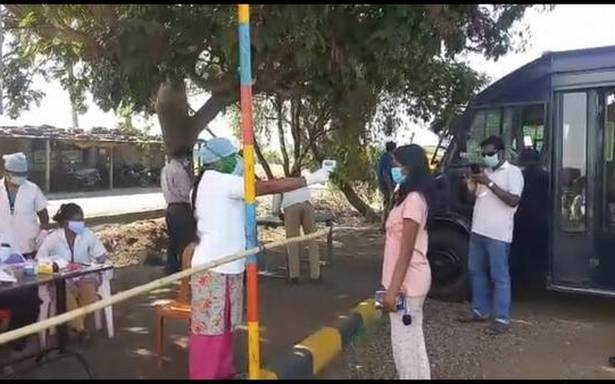 It is now mandatory for those coming into Karnataka from neighbouring Maharashtra to produce either a RTPCR negative report or COVID-19 vaccination certificate as Karnataka has taken up special surveillance measures in the wake of Delta Plus variant of COVID-19 being reported from several districts in Maharashtra.

A notification in this regard was issued by the Karnataka government on June 28.

According to the notification, the RTPCR negative report should not be older than 72 hours and the vaccine certificate should indicate at least one dose of vaccination.

The norm applies to all travellers coming by road, air and train. While it is the responsibility of airlines to issue boarding passes only to those possessing RTPCR negative report or vaccination certificate, the onus is on railway authorities to ensure that those travelling by trains have either of these documents.

The responsibility of making sure that passengers travelling by bus are in possession of such documents has been vested with conductors.

The deputy commissioners of Kalaburagi, Belagavi, Vijayapura and Bidar distrist, which share a border with Maharashtra, have been instructed to deploy adequate staff at check posts to ensure that all motorists entering Karnataka comply with the above norms, states the notification.

Exemption has been provided to constitutional functionaries, health workers and children below the age of two.

In case of dire emergency situation, like death in the family and medical requirements, passengers shall be allowed even without these requirements after collecting their swab sample for a test along with details of identity and address. Necessary action would be taken as per the protocol depending upon the test result, the notification states.

Violation of the conditions would attract action as per the Karnataka Epidemic Diseases Act, Disaster Management Act and Indian Penal Code.