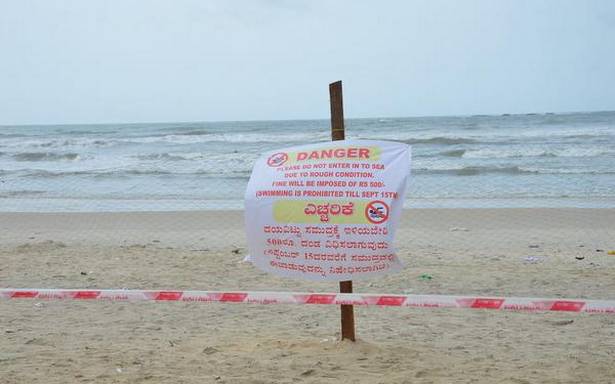 The leaseholder of Malpe Beach Tourism in Udupi district has erected nets and red flags along the beach warning tourists not to venture into the rough Arabian Sea.

The move comes in the backdrop of repeated incidents of drowning involving tourists, the latest being a woman on August 1. Sudesh Shetty from Mantra Tourism, the leaseholder, in a statement, said the nets have been erected along a one-kilometre stretch of the beach where tourists frequently venture into the sea.

Red flags and warning signs not to enter the water have been placed at regular intervals along the stretch, he said. He proposed a penalty of ₹500 on tourists who disregard the warning.

Precautionary measures being taken at Malpe beach in Udupi district on August 3, 2021.

A warning flag being put up at Malpe beach in Udupi district on August 3, 2021.

Warning flags being put up along Malpe beach in Udupi district on August 3, 2021.

The red flags are likely to be replaced with yellow ones by either the end of August or the first week of September when the monsoon is on the wane.

Despite repeated warnings on the public address system at the beach, tourists continue to risk their life and, hence, this measure, Mr. Shetty said.

Malpe beach, close to pilgrimage centre Udupi, attracts hundreds of tourists every day. It is a part of the Karnataka coastal tourism circuit and is also known for marine fishing activities. The St. Mary’s Island off Malpe coast too attracts tourists in good numbers.