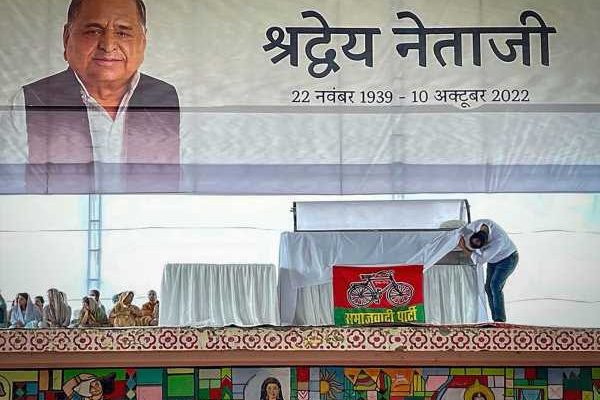 A sea of people descended on Tuesday for the last rites of veteran socialist leader Mulayam Singh Yadav at his native Saifai village in Etawah district of Uttar Pradesh, the cloudy sky and intermittent morning drizzle adding to the sombreness.

The Samajwadi Party founder and former Uttar Pradesh chief minister passed away aged 82 at a private hospital in Gurugram on Monday.

His mortal remains were brought to Saifai Monday evening and kept at his ‘kothi’ where people poured in to pay their last respects to netaji, as Yadav was fondly called.

With hundreds queued up for the final darshan amid the drizzle, Yadav’s body was moved around 10 am Tuesday from the house to a bigger hall on the Mela Ground premises, around one km away, to allow people to pay their last respects.

The former chief minister’s son Akhilesh Yadav, brother Shivpal Yadav and other family members were onboard the truck decked up with garlands of flowers. A huge crowd of people marched along as the vehicle moved slowly on the concrete road of the village.

Party workers and people in their hundreds — riding cycles, motorcycles, cars, SUVs and other means of transport — arrived at Saifai from areas nearby and places far off Tuesday morning for the final rites. The entire Saifai looked like a sea of whites as people from all walks of life came out of their houses in their whites, some on rooftops, some climbing the tress along the route and some making an attempt to just touch the vehicle that carried their beloved leader, their ‘Dhartiputra’ — son of the soil.

As the vehicle waded through the ocean of supporters, well-wishers and common public, Mulayam’s brother Shivpal Yadav stood on the vehicle in folded hands.

Samajwadi Party MLC Ashutosh Sinha, who is in Saifai to attend the last rites, told PTI.

“I arrived here last night at around 10.00. People from different walks of life have been coming to pay their last tributes to netaji, and it continued in the morning as well. Party workers from across the country have assembled to have the final glimpse of their beloved netaji, and bid him a goodbye for the final time.”

Manoj Mishra, a native of Etawah, reminisced how netaji knew people of the region by their first names. “Yadav was hugely popular among the locals for his connect with the masses,” he told PTI. 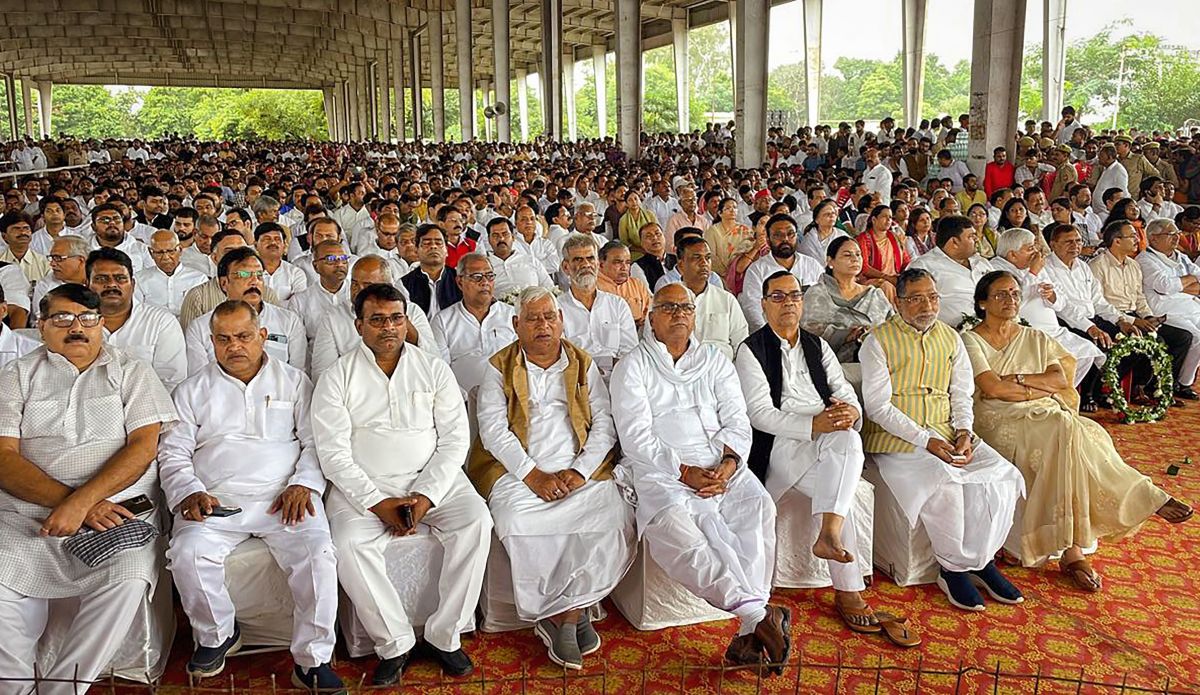 Among the crowd queued outside the kothi earlier in the morning was a group of six men who had come from Chunar village in Mirzapur in eastern UP.

“We left the village in an auto for Mirzapur railway station. Boarded a train at 11 pm and reached Etawah around 7 am,” Babu Nandan Yadav told PTI after Yadav’s darshan.

The cremation is scheduled for the afternoon and preparations were underway for the last rites at Saifai amid heavy security presence.

Clad in a white dhoti-kurta and a Gandhi topi, also white, 80-year-old Janak Singh came to Saifai from nearby Chaubeypur village.

“Neta ji A-one aadmi thhe,” Singh said, showering praised on the leader and recalling his love for wrestling and the Holi festival. “He was very fond of Faag (folk musical celebrations of Holi). He hosted wonderful Holi gatherings.”