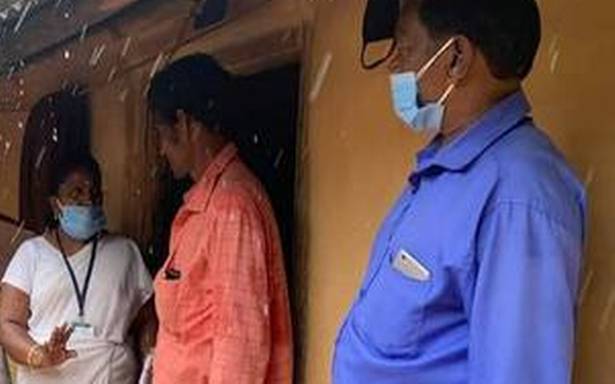 Though Chinnampathy was among 100-odd areas that remained free from infection in first wave, the situation has changed towards June-end

Chinnampathy, an Irula settlement in the Madukkarai forest range in Coimbatore district, was among the 100-odd tribal settlements in the western region that largely remained insulated from the COVID-19 infection in the first wave of the pandemic.

But the situation changed in the second wave towards June-end, and, that too, within a week. Many hamlets reported no case till the second week of June, but the infection infiltrated some of the settlements by month-end.

When The Hindu’s team interacted with residents and health officials, they suspected that the infection might have been brought in by some of the residents who ventured into the town or NGO volunteers who entered the settlements to render help.

But the results of the random tests done on 20 of the 250 residents of Chinnampathy came as a shock on Thursday as seven persons, including three children, were found infected. They were shifted to a COVID Care Centre at Kinathukadavu on Friday. The swab samples of all the others were lifted.

“None of the seven persons had fever or other symptoms. We believed that the settlement was free from COVID-19. Now all the residents are wearing mask at home too,” said Sandhya Shanmugam, the first graduate from the settlement.

A Health Department official said a few persons from the village visited the nearest towns to buy groceries. Some also went out for work. “We suspect that the infection came through them,” the official said.

Fever cases were reported in some of the settlements this year, especially after March. According to the Health Department, an anti-poaching watcher of the Anamalai Tiger Reserve (ATR) named Raja, a resident of the Navamalai settlement, died of COVID-19 in May. His job required him to be in contact with persons from outside.

The ATR is home to 35 settlements in Coimbatore and Tiruppur districts. The Health and Revenue Departments are making efforts to contain the spread of the disease among these forest-dwelling communities.

“Eleven settlements in the ATR fall within Valparai taluk where COVID-19 has not been reported yet. Fever camps are being conducted in these settlements,” Valparai tahsildar S. Raja said.

However, tribal welfare activist S. Thanraj of Ekta Parishad, Tamil Nadu, pointed out that the Revenue and Health Departments lacked demography of the forest-dwellers and a systematic approach towards monitoring their health. “Field staff like ASHA workers do not visit many settlements at frequent intervals because of the difficult terrain and for other reasons,” he said.

According to K. Ramasamy, president of Tamil Nadu Tribal People Association, cases occurred in some of the hill areas in Erode district with the return of workers from garment units in Tiruppur and other districts.

But many remote settlements, including Malliamman Durgham, Ukkiniyam and Nagalur in the Kadambur Hills and Sholaganai and Kathirimalai in the Bargur Hills, have reported no cases in the first and second waves.

“Since the needs of most of the tribal people are few and they depend on their own land for food, very rarely do they venture out. Also there is no road to settlements like Malliamman Durgham and Kathirimalai, and hence no outsiders visit the hamlets,” Mr. Ramasamy said.

In the Nilgiris, another district home to many tribal hamlets in the region, many people avoid testing, according to the field staff of the Health Department. Efforts are focused on vaccine-delivery in these areas.

A few ASHA workers with whom The Hindu spoke said there was not enough testing being done to declare that there was no spread of the infection in these areas.

In Tiruppur district, 17 tribal settlements in Udumalaipettai that fall in the limits of the ATR have not recorded a single case so far.

K. Ganeshram, Assistant Conservator of Forests and Additional Director of ATR (Tiruppur Division), said the Forest Department ensured that outsiders such as NGO workers did not enter the settlements and the residents did not venture out of the ATR limits except for emergency.

“Our staff have been providing groceries to the settlements and only select residents from the settlements are being allowed to purchase vegetables and fruits, in adherence to the safety protocol. Earlier this month, a 55-year-old man from one of the settlements was down with fever; his swab sample was lifted and the result was negative,” he said.

Out of nearly 4,000 residents of these 17 settlements, around 700 have been vaccinated since May, when the Forest Department began inoculation. “Senior citizens are hesitant to take the vaccines, while the youth have been coming forward to get themselves vaccinated,” Mr. Ganeshram said.

With a population of about 800, the two remote villages at Mellur and Kizhoor near Rasipuram in Namakkal district have not reported a single case so far, according to the Health Department.

The villagers usually trek down once a week to get essentials and have not been making frequent visits to the foothills ever since the lockdown was announced.

According to health officials, a separate health team has been formed to conduct periodical camps in these villages.

and Vignesh Vijayakumar from Namakkal)